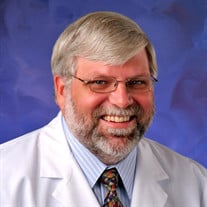 The memorial service celebrating the life of Dr. Aaron Larson of Wadena will be held at 11:00 a.m. on Tuesday, December 7, at the Immanuel Lutheran Church in Wadena, with Pastor Nate Loer and Pastor Megan Clapp presiding. Visitation will be held at the church on Monday, from 5:00 until 7:00 p.m. Visitation will resume at the church on Tuesday from 9:30 a.m. until the time of the service. The family requests that those who attend the visitation or service in person be vaccinated, wear a mask and refrain from physical contact. Aaron passed away unexpectedly of natural causes on December 1, 2021, in Wadena, MN. Aaron Edward Larson was born to Edward Jerome Larson and Eunice Irene Larson (Anderson) on November 18th, 1964 in Fargo, ND. He and his parents lived in Moorhead, MN where Aaron grew lifelong passions for music and nature. He attended Concordia College Moorhead earning a Bachelor of Arts degree in biology with a minor in music. He went on to study medicine at the University of Minnesota Duluth and the University of Minnesota Twin Cities. During Medical school, he married Peggy Wambach, his high school sweetheart, whom he met in Apollo Strings where he played cello. He completed his family practice residency in Sioux Falls, SD where he and his wife welcomed their first child, Hanna, in 1992. After accepting a position at the Wadena Medical Center in 1994, Aaron and his family moved to Wadena, MN where they welcomed two more children, Drew in 1995, and Alec in 2000. Aaron spent 16 years practicing family medicine finding purpose caring for patients of all ages, especially delivering newborns. One of his sources of joy through his work was getting to know his patients through conversation. In 2010, Aaron felt a calling to continue his education and pursued a degree in psychiatric medicine at the University of Minnesota. He completed the degree in three years and returned to Wadena to practice rural psychiatric care. Aaron deeply loved both his patients and his medical family. Aaron had many passions outside of medicine. Even though he wasn’t a farmer, he loved all things farming and was happy to volunteer his time helping Peggy’s dad on the farm. He was a diehard Minnesota sports fan and especially loved attending Twins games with his family. Riding his Harley and taking trips with valued friends were cherished experiences. He was deeply moved by performing and listening to music. Time spent in nature, whether hunting, fishing, or just being outside, always brought out his sense of wonder. His happy place was the family cabin on Big Pine Lake surrounded by beloved neighbors and family.  The greatest joy of Aaron’s life were his three children and three grandchildren. He was so proud of his children and the compassionate adults they have become, and treasured moments they could spend together. He loved being “Papa” and could be found playing trains, army, or wrestling on the floor whenever his grandchildren were around. He was looking forward to the birth of his newest granddaughter in March of 2022.  Aaron is preceded in death by his father Edward Larson, and his mother-in-law Bernedine Wambach. Surviving Aaron are his mother, Eunice Larson of Sebeka; wife, Peggy Larson; children, Hanna (Mike) Sievert [Grand Rapids, MN], Drew [Sitka, AK], and Alec [Northfield, MN]; grandchildren, Bentley, Stanley, and Guinevere; father-in-law, Robert Wambach [Georgetown, MN]; along with a host of family, friends, neighbors, colleagues and co-workers. Honorary urn bearers will be all of the current and retired members of TCHC medical staff. Active urn bearers will be Hanna, Drew and Alec. Burial will be held at a later date in Riverside Cemetery, Moorhead, MN. The family suggests memorials be directed to the University of Minnesota Duluth Medical Center orthe Mayo Clinic (https://philanthropy.mayoclinic.org/donateMC)

The memorial service celebrating the life of Dr. Aaron Larson of Wadena will be held at 11:00 a.m. on Tuesday, December 7, at the Immanuel Lutheran Church in Wadena, with Pastor Nate Loer and Pastor Megan Clapp presiding. Visitation will be... View Obituary & Service Information

The family of Dr. Aaron Larson created this Life Tributes page to make it easy to share your memories.

The memorial service celebrating the life of Dr. Aaron Larson...

Send flowers to the Larson family.