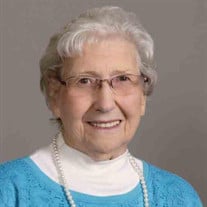 The Mass of Christian Burial for Agnes Kaufman of Wadena, will be celebrated at 11:00 a.m. on Friday, April 20, at the St. Ann’s Catholic Church in Wadena, with Father Aaron Kuhn as celebrant. Visitation will be held on Thursday at the Johnson-Schuller Chapel in Wadena from 5:00 until 7:00 p.m. with Rosary at 6:00 and Prayers at 7:00 p.m. Visitation will resume at the church on Friday from 9:30 a.m. until the time of Mass. Agnes passed away on Monday, April 16, 2018, at the Sanford Hospital in Fargo, ND. Agnes Genevieve Braith was born one of thirteen children to John and Martha (Bushinger) Braith on May 13, 1925, on a farm west of Blue Grass, MN. She graduated from the eighth grade at Leaf River Township District # 11 Country School. Agnes was united in marriage with George Kaufman on May 18, 1943 in Blue Grass. They resided north of Bluffton until 1948 when they moved to Casselton, ND. By 1954, they returned to the Bluffton, MN area until 1997 when they moved to nearby Wadena. Agnes was a homemaker who enjoyed gardening, baking, and sewing, and she was a talented quilter. She decorated many wedding cakes and was known for home-baked bread and her beautiful flower gardens. Most of all, she loved spending time with her family and friends. Agnes had a deep and abiding faith in God. Agnes was preceded in death by her husband, George, on July 18, 2003; her parents John and Martha; brothers John, Henry, John W., Albert, Peter, Frank and Hubert Braith; sisters Katie Moore, Martha Braith, Tracy Ament, Mathilda Walimaa and Angela Boyer; and son-in-law Dave Cushman. She will forever be loved by her children, Theodore “Ted” (Jane) Kaufman of Sebeka, Donna Cushman of St. Cloud, Verna Kaufman of Maple Grove and Gail (Jon) Neufeld of Calumet, MI; 11 grandchildren and 13 great-grandchildren; sisters-in-law Phyllis Braith, Marion Braith, Lucy Braith and Cecelia Dierks; along with numerous friends. Honorary pallbearers will be Agnes’ grandchildren and great-grandchildren. Pallbearers will be Mike, Dan, Mark and Daniela Kaufman, Keri Giese and Ben Cushman. Burial will be in Calvary Cemetery, Wadena, MN. The family suggest memorials be directed to the American Cancer Society.

The Mass of Christian Burial for Agnes Kaufman of Wadena, will be celebrated at 11:00 a.m. on Friday, April 20, at the St. Ann&#8217;s Catholic Church in Wadena, with Father Aaron Kuhn as celebrant. Visitation will be held on Thursday at the... View Obituary & Service Information

The family of Agnes Kaufman created this Life Tributes page to make it easy to share your memories.

The Mass of Christian Burial for Agnes Kaufman of Wadena, will...

Send flowers to the Kaufman family.