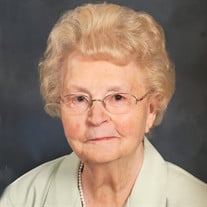 The Mass of Christian Burial for Agnes Winkels, age 98, of Verndale, MN, will be celebrated at 11:00 a.m. on Friday, March 22, at St. Frederick’s Catholic Church, in Verndale, with Fr. Lauren Germann as celebrant. Visitation will be at the Schuller Funeral Homes’ Verndale Chapel on Thursday from 4:00 until 7:00 p.m. with the Christian Mothers rosary service at 5:00PM and Parish Prayers at 6:00 p.m. Visitation will resume at the church on Friday from 9:30 a.m. until the time of the mass. Agnes passed away on March 15, 2019, at the Lakewood Care Center in Staples, MN. Agnes was born on July 30, 1920, to Edith and Tony Hoffman on her grandparents’ farm outside of Bluffton, MN. Her early years were spent growing up in Bluegrass, with her parents and five brothers. The family operated a dairy farm. Her father died when she was eight and the family moved to Bluffton and later Wadena. Agnes walked to country schools in Bluegrass and Bluffton. She attended St. Ann’s Catholic School in Wadena through eighth grade and graduated from Wadena High School in 1939. In 1941, she married Tony Winkels at St. Ann’s Catholic Church in Wadena. They first lived in Long Prairie, then Wadena. In 1945 she and Tony moved to Verndale. She lived in Verndale in the same house for 72 years where they raised their three children and became active members of the community. Agnes and Tony were charter members of the Verndale Historical Society. They were members of the Verndale Senior Citizens Club. In 1973 they became charter members and helped develop the Senior Citizen Center in Verndale. Agnes was involved in many community affairs and organizations. She was a Christian Mother and choir member for over 25 years. She was a charter member of Verndale P.T.A. holding secretary, treasurer and vice president positions for 16 years. She served on boards for Wadena County: Social Services for 8 years, Wadena County Public Health Advisory Board (17 years), Northern Pines Mental Health Center for Region 5 (12 years), Council on Aging, Advisory member for Verndale’s Nutrition Project Council (6 years) Board member for Wadena County Redevelopment and Housing Authority (12 years), and served as a board member for Retired Senior Citizens Program. Agnes worked outside the home for a number of years. She was employed for several years by Everett and Saraphine Davis at their grocery store in Verndale. She served as bookkeeper for Buz Nelson and Cliff Horn for 13 years during the time they had the feed business in Verndale. She worked as Center Manager for years at the Senior Citizens Center in Verndale, working there and volunteering until her retirement. Her work at the Center and in the community brought many opportunities her way. It inspired her to do something for others. It was her mission in life. She wrote a news letter in the Verndale Sun that captured life in Verndale and rural Minnesota. Agnes was an avid bird watcher. She loved sharing her knowledge of the birds (and of course the squirrels) who came to her feeder. She was an enthusiast of the Minnesota Twins – always had the game on TV. Agnes was devoted to her family. She loved spending time with them and always had the coffee pot on. Grandchildren and great grandchildren always knew there would be treats and candy in her kitchen drawer when they arrived. She will be dearly missed by her family, her dear neighbors and all who knew her. Agnes was preceded in death by her husband, Tony in 1992; parents; brothers, Albert, Leonard, Raymond, Willie, and Richard. Agnes will be lovingly remembered by her children, Bill (Nancy), of Minot, ND, Jim (Sandy) of Wadena, Mary Jo (Bob) Miller of Maple Grove; 10 grandchildren, 20 great grandchildren, 6 great-great grandchildren; and many nieces and nephews. Pallbearers will be Brian, Scott and Craig Winkels, Jim Winkels, Matt Kramer, and Kyle Beuning. Burial will be in St. Frederick's Cemetery, Verndale, MN. In lieu of flowers, the family suggests memorials be sent to the Verndale Historical Society, 204 N. Farwell St. Verndale, MN. 56481.

The Mass of Christian Burial for Agnes Winkels, age 98, of Verndale, MN, will be celebrated at 11:00 a.m. on Friday, March 22, at St. Frederick&#8217;s Catholic Church, in Verndale, with Fr. Lauren Germann as celebrant. Visitation will be at... View Obituary & Service Information

The family of Agnes Winkels created this Life Tributes page to make it easy to share your memories.

The Mass of Christian Burial for Agnes Winkels, age 98, of Verndale,...

Send flowers to the Winkels family.