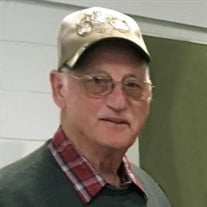 The Mass of Christian Burial for Albert “Pete” Williams of Hewitt, will be celebrated at 11:00a.m. on Tuesday, June 29, at St. Joseph’s Catholic Church in Bertha, with Father Aaron Kuhn as celebrant. Visitation will be held on Monday, June 28 from 4:00 until 7:00 p.m. with Prayers at 6:00 p.m. at the Domian-Anderson Chapel in Bertha.  Visitation will resume at the church on Tuesday from 9:30 a.m. until the time of the Mass. Pete, age 77, passed away with his family by his side, on June 21, 2021, after a lengthy stay at the Hospital in Alexandria, MN. Albert Peter Williams was born to Nelson and Josie (Cornillie) Williams on June 27, 1943, at Elbow Lake, MN.  He attended school at District #6 Country School in Otter Tail County, where he completed the eighth grade.  He started high school in Ashby but quit to work on the family farm between Ashby and Battle Lake, with his father.  He started buying and selling livestock and continued farming after his dad died.  Josie and the family then moved to Elbow Lake, living in the apartment above Janis Fleischacker’s home.  It was then that Janis caught Pete’s eye, and a few years later they were married on October 26, 1965. Pete worked with his father-in-law, Bernard, in St. Paul at an ammunition plant.  He later built Butler Bins for Christianson’s Inc.  Pete drove Cat for Spalding Brothers and later worked for Lohse Brothers building grain elevators.  In the early 1970’s, Pete and Janis decided it was time to move to Hewitt to get back to his true passion … farming!  On March 6, 2009, he had quadruple bypass heart surgery in St. Cloud.  For the last 55 years he spent his time milking cows, buying and selling cattle, custom hauling livestock, attending auctions, renting out breeding bulls, and enjoying a Friday night Pool League at Jody’s Shop. Preceding Pete in death were his parents, Nelson and Josie; in-laws, Bernard and Gert Fleischacker; granddaughter, Shelby Peterson; and siblings, Nelson “Bud” Williams, Patricia (Lyle) Young, Sara Jean (Peter) Matheson; and brother-in-law Orris Beck. Pete will always be remembered by his devoted wife, Janis of Hewitt; children, Julie Peterson of Bluffton, Chad (Lisa Pomeranz) Williams of Hewitt, Tammy (Bill) Baker of Wadena, Cindy Williams of Hewitt, Jody (Jeana Schaefer) Williams of Hewitt, Jason (Tara Christiansen) Williams of Hewitt and Heidi (Jay) Barthel of New York Mills, 20 grandchildren, 4 great-grandchildren; siblings, Mary Beck, Edward (Ann) Williams, John (Sandy) Williams, Dean (Donna) Williams and Sally Roth. Honorary pallbearers will be all of Pete’s grandchildren and great-grandchildren. Active pallbearers will be Vincent Peterson, Dalton Baker, Cole Motl, Dakota Motl, Cody Barthel, and Jason Jacob Williams Burial will be in St. Loretto Catholic Cemetery, Elbow Lake, MN.

The Mass of Christian Burial for Albert &#8220;Pete&#8221; Williams of Hewitt, will be celebrated at 11:00a.m. on Tuesday, June 29, at St. Joseph&#8217;s Catholic Church in Bertha, with Father Aaron Kuhn as celebrant. Visitation will be held... View Obituary & Service Information

The family of Albert "Pete" Williams created this Life Tributes page to make it easy to share your memories.

The Mass of Christian Burial for Albert “Pete” Williams of Hewitt,...

Send flowers to the Williams family.