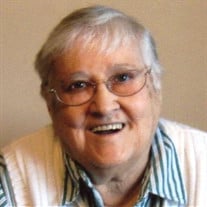 The Mass of Christian Burial for Alma Imdieke, of Wadena will be celebrated at 3:00 p.m. on Thursday, July 12, at the St. Ann’s Catholic Church in Wadena, with Father Aaron Kuhn as celebrant. Visitation will be held at the church on Thursday beginning with a Rosary at 1:30 and visitation will continue until the time of the Mass. Alma, age 94, passed away in the early hours of Monday, July 9, 2018, under the gentle care of Lakewood Health and Hospice, at the Lakewood Health System Care Center in Staples, MN. Alma was born to Joseph and Margaret (Brang) Imdieke on December 20, 1923, at Bluffton, MN, and moved with her family to Wadena in 1941. With her gentle spirit and bright disposition, Alma was a natural at caring for others. Throughout the years she provided childcare for local families and became special to them all. Alma was also a loving caretaker for her siblings as they aged. In her free time she enjoyed listening to music, especially Lawrence Welk and Daniel O’Donnell. She was talented at sewing, needlework and gardening. Alma enjoyed being the family historian and will always be a special aunt to the next generation - her nieces and nephews.   Preceding Alma in death were her parents; brothers Herman, Tony, Ben, John, Joe, Alphonse and Clarence Imdieke; her sister Loretta Imdieke; and infant siblings, Bernadine and Edward. Survivors include her beloved 16 nephews and nieces, along with their families; and good friends.   Honorary pallbearers will be all of Alma’s nieces and nephews. Active pallbearers will be Larry Imdieke, Gerry Imdieke, Dennis Imdieke, Alan Imdieke and Duane Imdieke.   Burial and releasing of doves will be held in Calvary Cemetery, Wadena, MN.

The Mass of Christian Burial for Alma Imdieke, of Wadena will be celebrated at 3:00 p.m. on Thursday, July 12, at the St. Ann&#8217;s Catholic Church in Wadena, with Father Aaron Kuhn as celebrant. Visitation will be held at the church on Thursday... View Obituary & Service Information

The family of Alma Imdieke created this Life Tributes page to make it easy to share your memories.

The Mass of Christian Burial for Alma Imdieke, of Wadena will...

Send flowers to the Imdieke family.