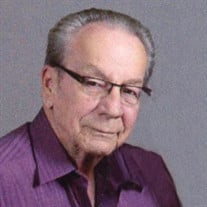 The Mass of Christian Burial for Andrew Roberts of Wadena will be celebrated at 11:00 a.m. on Tuesday, July 13, at St. Ann’s Catholic Church in Wadena, with Father Aaron Kuhn as celebrant. Visitation will be held at the church on Tuesday from 9:30 a.m. until the time of the service. With family at his side, Andrew, age 78, passed away on July 4, 2021, at the University of MN hospital, in Minneapolis, MN. Andy was born in Minneapolis, MN on November 5, 1942 to Glenn and Barbara (Schackman) Roberts. He was the youngest of five children and they moved to Park Rapids when he was two years old. He was quite a handful and had many stories to tell about his Catholic School days, in particular getting in trouble with the nuns, falling through the ice on the river and many other shenanigans with his siblings. In January 1960, Andy joined the United States Navy. He was very proud to be of service to his country and talked about the adventures to other countries and his time spent on the USS Lawrence. Andy was honorably discharged from the Navy in December of 1963. In October of 1964, Andy married Pamela Pritchett and together they had seven daughters. In 1974, Andy purchased Andy’s Electric Motor Service, which he owned for approximately 20 years. Andy then went on to work as a boiler operator for Potlatch until his retirement. In those early days, Andy and Pam loved to fish and hunt. They enjoyed many years of hunting in the Smokey Hills. Andy hunted until 2020 with his children, grandchildren, family and lifelong friends. He looked forward to deer camp every year and in fact wore the same red hat for more than 50 years. He made sure every new young hunter received an orange hat with their first year emblazoned on the front. He really loved narrating a good hunting story to all who would listen but especially to his grandchildren. While raising their seven daughters, affectionately called “The Lucky 7,” Andy and Pam enjoyed going for long car rides every evening after supper. Andy really enjoyed spending holidays and special occasions with his family and loved handing out Christmas gifts to all the daughters, grandchildren, and great grandchildren. He always tried to make his gifts meaningful and fun. Andy enjoyed cooking and he loved sweets. He was especially known for his bean soup and some of his daughters have spent years trying to duplicate it. In 2003, Andy met and married Cathy Fah and they have lived together in Wadena for 18 years. They enjoyed spending time with both families and traveling in the U.S. and abroad, specifically going to annual Navy reunions held around the nation and reconnecting with those he served with. Andy had a very strong faith and often made people feel closer to God. He and Cathy enjoyed mass and praying the rosary when in the car together. Anytime there was an event at church, they would call Andy to volunteer and you could usually find him in the kitchen pouring coffee or washing dishes. In his retirement, Andy enjoyed volunteering with the Wadena Lions Club where he earned the Helen Keller Sight Award. He held the offices of Director and Tail Twister and received the Lions perfect attendance award every year. Andy volunteered with Wadena County driving veterans to medical appointments. He also enjoyed driving to Park Rapids 2-3 days a week to work at The Secret Garden. While in Park Rapids, he would visit friends & family, staying connected to the community where he grew up and raised his family. Andy was preceded in death by his parents; wife, Pam; sister, Anne Marie Jahn; brothers, Richard Roberts, William Roberts; sister-in-law Mary Roberts; step son-in-law Kevin Schwantz. Andy is survived by his wife, Cathy of Wadena; daughters and their families: Connie (Russ) Carmichael of Park Rapids and their children and grandchildren, Logan (Kristina) Carmichael; Asarae (Matthew) Bartzatt – Jayce and Matayah; Andrew (Melissa) Carmichael – Cadin, Cole and Connor. Debbie (Tim) Lamb of Detroit Lakes and their children and grandchildren, Jenna (Andy) Lamb – Oliver; Summer (Floyd) Marshall – Kayden, Kiana, Kwinnlynn, Karielle; Nicki (Kasey) Hendrickson. Kari (Eric) Smith of Park Rapids and their children and grandchildren, Rylee (Brenna) Smith – Gavin and Ryder; Talya Smith Nikki (Dale) Rogers of Akeley and their children and grandchildren, Bethany (Casey) Rogers – Brantley; Lexi Feldt; Rodney Rogers Andrea (Joe) Morgan of Park Rapids and their children, Hannah, Brandi and Tysen Morgan. Shanna (Bryan) Amundson of Detroit Lakes and their children, Gage, Chase and Blake Amundson. Chris (Dan) Moe of Menahga and their children, Bradly Rousu, Brandon (Taylor and unborn baby Colt) Rousu, and Emily Moe. step children and their families: Steve Fah of Wadena; Scott (Darlene) Fah of Hewitt and their children and grandchildren, Ken Fah; Kayla Kaeter – Kaydin and Troy; Brandon (Shannon) Fah of Hewitt; Laura Schwantz of Holdingford and her children and grandchildren, Brittany (Adam) Paasch – Trenton, Kaylee, Riley, and Elijah; Jessica (John) Sweep – Jay and Milo; Cassandra Schwantz. sister, Barbara Jean (Doug) Goth of St. Michael, sister-in-law, Mary (Bob) Safratowich of Park Rapids; and many other nieces, nephews, friends and family. Military Honors provided by MNAGHG. Burial will be held at 3:00 p.m. in Greenwood Cemetery, Park Rapids, MN.

The Mass of Christian Burial for Andrew Roberts of Wadena will be celebrated at 11:00 a.m. on Tuesday, July 13, at St. Ann&#8217;s Catholic Church in Wadena, with Father Aaron Kuhn as celebrant. Visitation will be held at the church on Tuesday... View Obituary & Service Information

The family of Andrew "Andy" Roberts created this Life Tributes page to make it easy to share your memories.

The Mass of Christian Burial for Andrew Roberts of Wadena will...

Send flowers to the Roberts family.