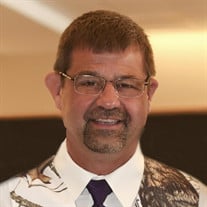 The Mass of Christian Burial for Andrew Radermacher of Wadena will be celebrated at 11:00 a.m. on Thursday, August 5, at St. Ann’s Catholic Church in Wadena with Father Aaron Kuhn as celebrant. Schuller Family Funeral Homes & Cremation Services is inviting you to a scheduled Zoom service. Visitation will be held at St. Ann’s Parish Hall in Wadena, on Wednesday, from 4:00 until 7:00 p.m., with Prayers at 5:00 and Knights of Columbus Rosary at 6:00 p.m. Visitation will resume at the church on Thursday from 9:30 a.m. until the time of the Mass. Surrounded by his family, Andrew, age 62, passed away on Saturday, July 31, 2021, at his home in rural Wadena, MN, under the compassionate care of Knute Nelson Hospice. Andrew was born the ninth child of eleven, to Myron “Tony” Aloysius and Catherine (Nistler) Radermacher on November 9, 1958, at Wesley Hospital in Wadena, MN. He graduated high school with the Class of 1976. Andrew was united in marriage with Janelle Mae Saxlund on September 22, 1984, in Lisbon, ND. They made their home in rural Wadena, MN. Andrew worked for Douglas Machine in Alexandria. In his time away from work, he liked working on Ford tractors, and appreciated the outdoors while hunting and fishing. He especially enjoyed spending time with family on hunting land, and treasured the time with his kids and grandkids. They loved taking rides together in the Ranger, driving around to look at food plots and checking on firewood piles at the Amish sawmills. Preceding Andrew in death were his father, Tony. He is survived by his devoted wife, Janelle of Wadena; children, Jessica (Chris Bryce) Radermacher of Alexandria, Ryan (Ashley) Radermacher of Alexandria, and Christa (Jesse) Bauck of Bluffton; grandchildren, Oliver, Hudson and Adalind; mother, Catherine Radermacher of Staples; siblings, Joseph (Jean) of Staples, Dorothy (Howard) Priebe of Brainerd, Anne Converse of Staples, MaryLou (Thomas) Ludovissie of Verndale, Michael (Patti) of Cohasset, Rita (Michael) Kirchner of Slayton, Gerald (JoAnn) of Grand Rapids, Thomas (Mary Lee) of Cohasset, Susan Gibbons of Alexandria, Patrick (Melissa) of Alexandria; Janelle’s parents, Blaine and Rolene Saxlund of Fargo, ND; sisters-in-law, Pam (Scott) Powers of Dayton, VA, and Teresa (Mark) Moderow of Fargo, ND; brothers-in-law, David Saxlund of Sioux Falls, SD and Craig Saxlund of Fargo, ND; along with a host of nieces, nephews and friends. Honorary pallbearers will be Oliver and Hudson Bauck. Serving as pallbearers will be Ryan Radermacher, Jesse Bauck, Chris Bryce, Joe Radermacher, Mike Radermacher, Gerry Radermacher, Tom Radermacher, Pat Radermacher, Andy Radermacher, Mark Radermacher, and John Radermacher. Burial will be in Calvary Cemetery, Wadena, MN.

The Mass of Christian Burial for Andrew Radermacher of Wadena will be celebrated at 11:00 a.m. on Thursday, August 5, at St. Ann&#8217;s Catholic Church in Wadena with Father Aaron Kuhn as celebrant. Schuller Family Funeral Homes & Cremation... View Obituary & Service Information

The family of Andrew Radermacher created this Life Tributes page to make it easy to share your memories.

The Mass of Christian Burial for Andrew Radermacher of Wadena...

Send flowers to the Radermacher family.