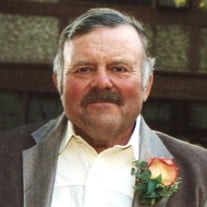 Funeral services for Arvid Robert Fischer, of Sartell and formerly of Wrightstown, will be held at 11:00 a.m. on Friday, July 24, 2020 at the New Life Church of God in Bertha with Pastor Mark Bateson of the Wrightstown United Methodist Church presiding. A visitation will be at Schuller Family Funeral Homes' Johnson-Schuller Chapel in Wadena on Thursday from 5:00 until 8:00 p.m. and will continue at the church in Bertha on Friday from 9:30 a.m. until the time of service. Arvid, age 82, died of natural causes on Saturday, July 18, 2020, at the St. Cloud Hospital in St. Cloud, MN. Arvid was born to Robert and Eunice (Knox) Fischer on March 5, 1938 in Bertha, MN, where he attended school through the 12th grade. Arvid was united in marriage with Melba Wittmayer on November 19, 1960, in Wrightstown. They were married for 34 years and adopted two children, Steven and Angela. Arvid was born to be a dairy farmer his whole life. Before he graduated high school, he already had a herd of cows to start his business on his parent’s farm. In 1970, Arvid and Melba purchased their own farm. After a few years they built a barn to move their cows to grow their business. At one point, they milked approximately 100 cows. Arvid loved farming! In 2013, he was diagnosed with dementia and moved to a Sartell memory care center where he resided for the remaining years of his life. Arvid was a friendly man, who loved farming, hard work, dancing and riding motorcycle. He enjoyed a good laugh and had a knack for telling jokes. Preceding Arvid in death were his parents Robert and Eunice; sister Diane Packard; and a cousin, Norman Krey. Arvid is survived by his children Steve (Brenda) Fischer of Wadena and Angela (Scott) Lambert of Becker; nine grandchildren and two great-grandchildren; along with brother-in-law Art Packard. Honorary pallbearer will be Donovan Krey. Serving as pallbearers will be William Fischer, Johnathon Fischer, Benjamin Fischer, Brianna Fischer, Nickolas Fischer, Tyler Lambert, Victoria Lambert, Matthew Lambert, Jacquelyn Lambert and Art Packard. Burial will be in Woodside Cemetery, Wrightstown, MN.

Funeral services for Arvid Robert Fischer, of Sartell and formerly of Wrightstown, will be held at 11:00 a.m. on Friday, July 24, 2020 at the New Life Church of God in Bertha with Pastor Mark Bateson of the Wrightstown United Methodist Church... View Obituary & Service Information

The family of Arvid Fischer created this Life Tributes page to make it easy to share your memories.

Funeral services for Arvid Robert Fischer, of Sartell and formerly...

Send flowers to the Fischer family.