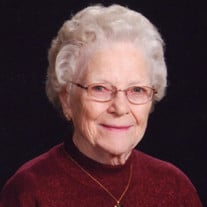 The funeral service for Audrey Clementson, of Osakis and formerly of Eagle Bend, will be held at 2:00 p.m. on Saturday, September 5, at the Faith Lutheran Church in Eagle Bend, with Pastor Del Moen presiding. Visitation will be held at the church on Saturday from 12:30 p.m. until the time of the service. Audrey age 93, passed from this life to eternal life on September 1, 2020, at the Lakeside Lodge Adult Foster Care in Osakis, MN. Audrey Loretta (Farrell) Clementson was born to James and Clara (Hammond) Farrell on March 10, 1927 in Eagle Bend, MN, where she grew up with two brothers, Chester and Orville. Audrey was baptized June 12, 1931 and confirmed July 4, 1937 in the Lutheran faith. She graduated from Parkers Prairie High School on May 13, 1945. Audrey was united in marriage with Darrell Luverne Clementson on June 8, 1947, in Petri Lutheran Church in Eagle Bend. They were blessed with daughters Shirley and Marlys along with a son, Duane. They farmed in the Eagle Bend area from 1947 until 1955. Due to Darrell’s health they moved to Conrad, MT until 1959. Audrey always referred to these years as the vacation! They returned to Minnesota and lived near Rose City before moving to Eagle Bend in 1965. She was a sales clerk at Weibye’s Department Store from 1965 until the store closed in April of 1993. Audrey was blessed with many talents. She was a wonderful and faithful care giver to Darrell, especially after his stroke in 1971 until his death in 1980. She loved her children and grandchildren. She made it evident in everything she did, including making their favorite foods for holidays. She also shared her handiwork, which was anything she could make with knitting needles or crochet hooks - quilts, afghans, slippers, doilies, pot holders, dish cloths, and covered hangers. Her hands were rarely idle and her sewing machine was always open to work on her many sewing projects. Audrey also made and decorated beautiful wedding, anniversary and birthday cakes, all with precision and love. She made all of her children’s wedding cakes and even some for her grandchildren. When Audrey’s hands weren’t busy her feet were...she loved to dance! She also loved her travels to Arizona, the west coast, and Alaska, and enjoyed bus trips to other parts of the US. Audrey gardened many years until moving from her home in 2012 to the Greenleaf Apartments in Eagle Bend. She moved from the apartment to an assisted living in Alexandria in 2015, and two years later to the Lakeside Lodge Foster Care in Osakis. Preceding Audrey in death were her loving husband Darrell; parents James and Clara; and brothers Chester and Orville. Audrey will be greatly missed by her children Shirley (Dennis) Nesges of Wilmar, Marlys (Monte) Severson of Alexandria, and Duane (Sandy) Clementson of St. Peter; 9 grandchildren and 12 great-grandchildren; sisters-in-law Claudia Farrell and Elaine Clementson; several nieces and nephews; along with numerous other relatives and friends. Pallbearers will be Audrey’s grandchildren. Burial will be in the Swedish Emmanuel Episcopal Cemetery, Eagle Bend, MN. Memorials may be directed to the Douglas County Hospice, 725 Elm St #1200, Alexandria, MN 56308 hospicedouglascounty.org

The family of Audrey Clementson created this Life Tributes page to make it easy to share your memories.

The funeral service for Audrey Clementson, of Osakis and formerly...

Send flowers to the Clementson family.