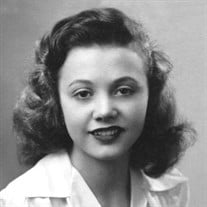 The Mass of Christian Burial for Barbara Malone of Wadena will be celebrated at 11:00 a.m. on Tuesday, December 21, at St. Ann’s Catholic Church in Wadena. Visitation with family and friends will be held on Monday, from 4:00 until 7:00 p.m. at St. Ann’s Parish Hall in Wadena, with a Rosary at 5:00 and Prayers at 6:00 p.m. Visitation will resume at the church on Tuesday from 9:30 a.m. until the time of the Mass. Barbara Ann (Pickar) Malone was born to John “Ed” and Ann Irene (Wyatt) Pickar on December 25, 1927 in Wadena, MN. She was baptized and confirmed at St. Ann’s Parish in Wadena, and passed away on December 17, 2021 at Perham Living, at the age of 93. Barbara was a devoted wife, mother and homemaker. Growing and harvesting a big garden every summer, teaching and training children in kindness, and supporting the family farm was Barbara’s life routine for many years.   Barbara, a 1945 graduate from Wadena High School, furthered her education at a nursing school in Fargo, ND. She had met a handsome Irishman, however, and soon returned to Wadena. She later became a night nurse at the Wesley Hospital. Barbara continued to serve others beyond her family through being a secretary at Homecrest Industries, working as an accountant at the Pepsi Cola Bottling Company, and concluded her career at the Wadena Highway Department, retiring in 1996. At St. Ann’s Parish in Wadena, Barbara was united in marriage to Maurice Richard Malone on August 27, 1946. They eventually made their home on a farm southwest of Wadena. Their union was blessed with 13 children and 47 years of oneness. Barb enjoyed the many fishing trips to Canada with Maurice, family and friends. Faith, family, and fairness are three words that best describe Barb’s values throughout her life. She was a woman of faith, as seen through her membership of Christian Mothers, regularly attending Mass, praying daily for her family, and trusting God for daily protection and provisions. For Barb, spending time with family brought joy and meaning to life. The adventures of fishing and camping trips, special celebrations for grandchildren and great-grandchildren, as well as gathering for the holidays was her delight. Consistently accepting others for who they were, Barb exemplified the attribute of impartiality. Barb enjoyed flowers and being a member of the Wadena Garden Club. Containers filled her patio each summer, and she took pride in showing her gardens to the frequent family and friends who visited her. Cut flowers in her home brought her much satisfaction, as well. Through her enjoyment of knitting baptismal gowns, afghans, hats, and mittens, Barb created many treasured items for her grandchildren and great-grandchildren. She carefully chose colors that matched their winter coats or favorite colors; she would even trace their hands on a piece of paper to make them just the right size. Additionally, Barb was a talented painter, creating large and small prints with her signature talent.   For many years, this included painting intricately detailed winter scenes on Christmas bulbs that she gave as gifts to those she loved. Wanting to pass her talents to the next generation, she took pleasure in teaching painting and knitting skills to her grandchildren and great-grandchildren. Both the items she made and the lessons she taught remain invaluable treasures to all who have received them. In her later years, Barb enjoyed playing dominoes with family and friends at the nursing home. She especially enjoyed visits from children, grandchildren, and great-grandchildren. She kept candy in her drawer, not just for her, but to share with those “greats” when they visited. She was never bothered by chaos and noise brought by children, instead she welcomed them with smiles and hugs. Preceding Barbara in death was her dear husband Maurice and one preborn child. Her parents: John (Ed) and Ann Irene. Her siblings: Carolyn Almack, Bill Pickar, John Pickar, daughter-in-law Judy Malone, numerous preborn grandchildren, great-grandchildren, and great-great grandchildren, and many in-laws. She is survived by her 13 children: Richard (Mary Jane) Malone, Deer Creek; Dennis (Debbie) Malone, New York Mills; Catherine Belmont (Jim Schulte), Ottertail; Jeam (Gary) Glass of Richville, Michael Malone, New York Mills; Donald (Ellen) Malone, Wasilla, AK; Gregory (Mary) Malone, Wadena; Susan (Roger) Altstadt, Perham; Eileen (Louis) Westland, Perham; Mary (Allen) McKay, Devils Lake, ND; David (Janet) Malone, New York Mills; Ronald (Eileen) Malone, Wadena; and Carolyn (David) Holecek, Thief River Falls. As well as a growing family of 59 grandchildren,115 great-grandchildren, 5 great-great grandchildren, and several extended family members. Burial will be in Calvary Cemetery, Wadena, MN.

The Mass of Christian Burial for Barbara Malone of Wadena will be celebrated at 11:00 a.m. on Tuesday, December 21, at St. Ann&#8217;s Catholic Church in Wadena. Visitation with family and friends will be held on Monday, from 4:00 until 7:00... View Obituary & Service Information

The family of Barbara Malone created this Life Tributes page to make it easy to share your memories.

The Mass of Christian Burial for Barbara Malone of Wadena will...

Send flowers to the Malone family.