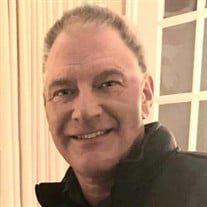 The celebration of life memorial service for Barry Klemek of Hewitt will be held at 11:00 a.m. on Tuesday, February 9, at the United Methodist Church in Hewitt, with Pastor Ken Uhren presiding. A visitation will be held at the Schuller Family Funeral Homes' Domian-Anderson Chapel in Bertha on Monday from 5:00 - 7:00 p.m. and will continue at the church on Tuesday from 9:30 a.m. until the time of service. The family requests that everyone wear a mask due to Covid-19. Barry, age 59, passed away after a year long battle with cancer with family by his side, at his home near Hewitt, MN, on Tuesday, February 2, 2021, under the tender care of Lakewood Health System Hospice. Barry was born to Max Jr and Mary Lou (Hennagir) Klemek on July 29, 1961 in Browerville, MN. He attended high school at Bertha-Hewitt and graduated in 1980. Shortly after, Barry was united in marriage with Robin Anne Laust on December 6, 1980, in Hewitt. For over 30 years Barry worked at Lund Boats in New York Mills MN. He worked in numerous departments and made many friends. For the last 8 years Barry worked for the United States Postal Service as a city carrier based out of Wadena, but traveling to help in Brainerd, Park Rapids, Perham, Little Falls, Long Prairie, Staples and Sauk Centre.  He loved fishing with his family, even catching a few "big ones" over the years. He shared his love of hunting with his Dad, brother and children and had a few trophies in his collection. He was smart, loving and an excellent cook. He was also known for his quick wit, great sense of humor and ready smile. He will be deeply missed by his family and friends especially by his 6 grandchildren with whom he spent as much time as possible with as their devoted "Papa." Preceding Barry in death were his mother, Mary Lou; father-in-law, Charles Laust; brother-in-law, Earl "Chip" Laust and sister-in-law, Brenda Laust. Holding Barry's memory close in the their hearts, are his wife, Robin of Hewitt; children, Matthew Klemek of Bertha, Megan (Eddie) Dolezal of Bertha, and Michael (Ashley) Klemek of Deer Creek; grandchildren, Max Klemek, Lauren, Alexa, Claire, and Rylee Dolezal and Ryan Klemek; father, Max Klemek Jr; siblings, Larry (Marilyn) Klemek of Bertha and Karen (Paul) Walgren of Clarissa; mother-in-law, Marian Laust, along with a host of family, friends and neighbors. Honorary Urn bearers will be his grandchildren. Burial will be held at a later date in Wadena Cemetery, Wadena, MN.

The celebration of life memorial service for Barry Klemek of Hewitt will be held at 11:00 a.m. on Tuesday, February 9, at the United Methodist Church in Hewitt, with Pastor Ken Uhren presiding. A visitation will be held at the Schuller Family... View Obituary & Service Information

The family of Barry Klemek created this Life Tributes page to make it easy to share your memories.

The celebration of life memorial service for Barry Klemek of...

Send flowers to the Klemek family.