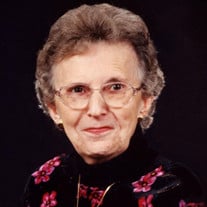 The funeral service for Beatrice “Bea” Brasel formerly of Bertha, will be held at 11:00 a.m. on Tuesday, May 22, at St. Paul’s Lutheran Church in Bertha, with Pastor Blake Rickbeil presiding. Visitation will be held at the church on Tuesday from 9:30 a.m. until the time of the service. Bea, age 86, passed away on Wednesday, May 16, 2018 at the Ecumen Evergreens Care Center in Moorhead, MN, under the loving care of Hospice of the Red River Valley. Beatrice “Bea” was born to Louise and Anne (Roers) Ritten on April 15, 1932, in Belle River, MN. Bea completed the eighth grade and later took courses to obtain her GED while living in Moorhead. Bea was united in marriage with Otto “Jack” Henry Brasel on April 15, 1952, in International Falls, MN. Bea’s days were busy making a home for her family and as a childcare provider. In her free time she found joy in sewing and baking for her family, crocheting, collecting cardinals and working puzzles. She never passed-up a good garage sale or dollar store! Bea was a member of the Ladies Aid at St. Paul’s Lutheran Church. Preceding Beatrice in death were her husband, Otto, on February 19, 1992; infant daughters Susan and Karen; parents Louis and Anne; and brother Gerald Ritten. Survivors include her sons Raymond (Patty) of Bertha, Steven (Tammy) of Waskish, and Rodney (Alma) of Moorhead; 13 grandchildren and 26 great-grandchildren; Goddaughter Judy (Dennis) Logan of NC; brothers Donald (Monica) of St. Joseph, IL, Richard of Salina, KS and Bernard (Marie) of Rapid City, SD; sisters Eileen Engh of Chesterfield, MO, Louanne Stephenson of Moorhead, and May Lou Riley of St. Louis Park; along with her friend and companion, Albert Becker; and numerous friends in the Bertha and Moorhead areas. Honorary casket bearers will be Kimberly Peck, Christy Brasel, Sarah Brasel, and Jessica Brasel, Melissa Wolf, and Rosally Mortenson. Pallbearers will be Chad Brasel, Matthew Brasel, Tyler Brasel, Jared Brasel, Corey Peck and Jeremy Martinez. Burial will be in Greenwood Cemetery, New York Mills, MN.

The funeral service for Beatrice &#8220;Bea&#8221; Brasel formerly of Bertha, will be held at 11:00 a.m. on Tuesday, May 22, at St. Paul&#8217;s Lutheran Church in Bertha, with Pastor Blake Rickbeil presiding. Visitation will be held at the... View Obituary & Service Information

The family of Beatrice Brasel created this Life Tributes page to make it easy to share your memories.

The funeral service for Beatrice “Bea” Brasel formerly of Bertha,...

Send flowers to the Brasel family.