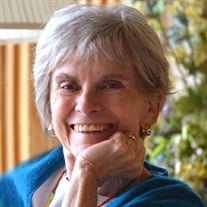 Benda Lee Davis (Brockway), 79, from Battle Lake, Minnesota, died on Wednesday, August 18th, 2021, at Essentia Health hospital in Fargo, North Dakota. A celebration of life will be held at 11:00 AM on Monday, August 30th, 2021, at the Glendalough State Park amphitheater in Battle Lake, with pastors Cindy Lemke and Jim Stoneman officiating. People are welcome to arrive on Monday from 10:00 am until the start of the service. (*Note: No State Park Pass will be needed by attendees of this event.) This will be an outdoor service, and the family would like to encourage COVID awareness from all. Benda was born in Helena, Montana, on August 28, 1941, to Benjamin (B.W.) and Leone (Kidd) Brockway. After multiple moves, the family settled in Fargo, ND, where she graduated in 1959. She attended NDSU for two years, where she met Gary Davis, at the insistence of their sisters, Sally and Sharon. They married on September 14, 1961, and moved to Minneapolis, where their three daughters were born. In 1969, they moved to Wadena, MN, when the Russ Davis Wholesale warehouse was built. Benda was a strong advocate of education, learning, and literacy and was known to dive deeply into topics that interested her. She was endlessly curious and was known for asking questions. She received a B.A. in English in 1985 from Moorhead State University, tutored ESL (English as a second language), taught Sunday school at church, worked at the Wadena City Library, read voraciously, and especially enjoyed the morning paper. Benda was an active community member, organizing and assisting with many organizations. Her favorites were the recycling program in Wadena, MN, which she and Sarah Yetter started in 1974. She also helped found Womanade, a local organization that helps support students in surrounding school districts. She was passionate about environmental and social issues, scuba diving, museums, and beautiful places. She was an amateur geologist, excellent knitter, snappy game player, and enjoyed a witty limerick. Benda was a wonderful wife, mother, grandmother, and friend. She is preceded in death by her husband Gary, her parents, sister Sharon Scherer and sister-in-law Sally Lehr. She was also preceded by her brothers-in-law, Jim Lehr and Robert Scherer. She is survived by her family, including daughters, Katy Davis (Mark) Neitzke of New Richmond, WI, Amy Davis of Duluth, MN, and Darcy Davis of Makawao, HI; her grandchildren, Gary (Stacee) Rosier, Marissa Neitzke, Tori Neitzke, Jack Hecker, Isaiah Acia, Micah Acia, and three great-grandchildren - all whom she adored greatly. So many more people were special to her, including her sister-in-law Linda Davis Rumery, adored nieces and nephews, and all her wonderful friends. Benda also had a special place in her life for her care team - Jamie, Aune, Valissa, Kate, Jese, and Mia. In lieu of flowers, the family would prefer memorials to: Womanade Helping Hearts, P.O. Box 466, Perham, MN 56573, Wadena City Library Renovation Fund, 405 1st St. S.E., Little Falls, MN 56345, Glendalough Park Partners, P.O. Box 901, Battle Lake, MN 56515, and Friends of Auwahi Forest Restoration Project, P.O. Box 652 Makawao, HI 96768.

Benda Lee Davis (Brockway), 79, from Battle Lake, Minnesota, died on Wednesday, August 18th, 2021, at Essentia Health hospital in Fargo, North Dakota. A celebration of life will be held at 11:00 AM on Monday, August 30th, 2021, at the... View Obituary & Service Information

The family of Benda Davis created this Life Tributes page to make it easy to share your memories.

Send flowers to the Davis family.