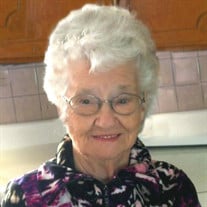 The public Memorial Mass of Christian Burial for Bernadine Lorentz of Wadena will be celebrated at 11:00 a.m. on Saturday February 6th at St. Ann’s Catholic Church in Wadena, with Father Aaron Kuhn as celebrant. A public visitation with family and friends will be held at the church on Saturday from 9:30 a.m. until the time of the Mass. A Rosary will begin at 9:30 a.m. Bernadine, age 94, passed away with family by her side on January 28, 2021, at Bethany on the Lake Care Center, in Alexandria, MN, with compassionate care by Hospice of Douglas County. Bernadine, “Bernie”, was born to Anthony and Christine (Brockpahler) Schleder on January 7, 1927, in Sebeka, MN. On April 20, 1948 she was united in marriage with Ralph Anthony Lorentz at St. Hubert's Catholic Church in Bluegrass. They made their home in Wadena until 1960, when they moved with their eight children to Roseville, MN. With the addition of two more children, the family returned to the farm in Wadena in 1970. She spent the next 20 years working at Homecrest Industries and raising her children and grandchildren. Bernie and Ralph travelled extensively across the US, Canada, Mexico and several countries in Europe. She was a very active member of St. Ann’s Catholic Church in Wadena, and volunteered extensively in both the church and the parochial school. Bernie was always enthusiastic about life and welcomed everyone into her home. She loved everything she did, but loved her family and friends most of all. Preceding Bernie in death were her husband Ralph (2007); parents; five brothers and sisters; and granddaughters, Tracy Wilson and Whitney Berg. Left with happy memories of Bernie are her kind and generous children, Steve (Rose), Paul (Elaine), Jerry (Bev), Alan (Kathy), Peggy (Jim) Brendel, Tim (Brenda), Ted (Vicki), Nancy (Stan) Berg, Christine Lorentz, and Louie (Tammy); 25 brilliant grandchildren, and 27 beautiful great-grandchildren; along with numerous in-laws, nieces and nephews. Burial will be in St. Frederick’s Catholic Cemetery in Verndale, MN.

The public Memorial Mass of Christian Burial for Bernadine Lorentz of Wadena will be celebrated at 11:00 a.m. on Saturday February 6th at St. Ann&#8217;s Catholic Church in Wadena, with Father Aaron Kuhn as celebrant. A public visitation with... View Obituary & Service Information

The family of Bernadine "Bernie" Lorentz created this Life Tributes page to make it easy to share your memories.

The public Memorial Mass of Christian Burial for Bernadine Lorentz...

Send flowers to the Lorentz family.