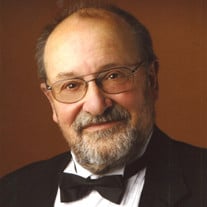 The gathering of family and friends celebrating the life of Bernard "Bernie" Nelsen of Wadena, will be held on Tuesday, June 12 with an open house 4:00-8:00 and a circle of sharing and song at 7:00PM, at the Johnson-Schuller Chapel in Wadena. Bernie passed away unexpectedly at the age of 83, on Saturday, May 19, 2018 at his home in Wadena, MN. Bernard Carl Nelsen was born to Carl Andrew and Evelyn Mary (Bowyer) on July 15, 1934, in Cedar Lake, IA, and grew up in Omaha, NE. Bernie graduated from Wisconsin State College at Eau Claire with a BS degree in secondary education, majoring in history with a minor in psychology/sociology. He did post graduate work at Winona State University and received his MA degree in educational psychology at the University of Minnesota. Bernard was united in marriage with Patricia "Patty" Jean Korn on February 1,1958 in Eau Claire, WI. Over the years he worked as a teacher and counselor at Gale-Ettrick High School in Galesville, WI (1958-1961), Hinckley High School, Hinckley, MN (1962-64), and Wadena-Deer Creek High School, Wadena, MN (1964-1993). Bernie also served as a facilitator at numerous PIP Fests for Partners In Prevention. In his retirement Bernie loved spending time with his family. He enjoyed fishing for salmon at Lake Michigan, halibut in Alaska, walleye at Lake Mille Lacs and fly-in fishing in Canada. He looked forward to deer hunting with family and friends and  pheasant hunting with his beloved springer spaniels, Dot and Dove. He liked gardening, crossword puzzles and breakfast with friends at the Boondocks Cafe. Bernie was an avid Twins fan. He cherished singing with the Staples Area Men's Chorus, highlighted by performances in England and Carnegie Hall in New York City. Bernie also served on the Five Wings Art Council. Preceding Bernard in death were his parents Carl and Evelyn; and his sister Karen Jo Nelsen. He will forever be missed by his wife Patricia of Wadena; sons and daughters , Michael of Minneapolis, Amy (John) Rasmussen of Sauk Rapids, Sheila (Sarah) Nelsen-Amado of Minneapolis, Stephen (Karen Kohler) Nelsen of Hutchinson, and Wayne Nelsen of Minneapolis; grandchildren Abigail, Jennifer and Jaclyn Rasmussen; Karlee, Tristin and Andrew Nelsen, and Zochi Nelsen-Amado;  sisters Mary Ellen (Phil) McClendon of Florida, Judy (Ron) Herrick of Minnesota, Kay (David) Jenness of Washington and Betty Nelsen of California. At Bernie's request his remains were donated to the University of Minnesota Medical School for research. The family suggests memorials be sent to The American Cancer Society, the University of Minnesota Medical School, and the Staples Area Men's Chorus.

The gathering of family and friends celebrating the life of Bernard "Bernie" Nelsen of Wadena, will be held on Tuesday, June 12 with an open house 4:00-8:00 and a circle of sharing and song at 7:00PM, at the Johnson-Schuller Chapel in Wadena.... View Obituary & Service Information

The family of Bernard "Bernie" Nelsen created this Life Tributes page to make it easy to share your memories.

The gathering of family and friends celebrating the life of Bernard...

Send flowers to the Nelsen family.