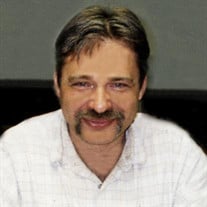 The Mass of Christian Burial for Bernard “Bernie” Keppers of Perham and formerly of Wadena will be celebrated at 11:00 a.m. on Friday, August 31, at St. Ann’s Catholic Church in Wadena, with Father Aaron Kuhn as celebrant. Visitation will be held on Thursday at the Johnson-Schuller Chapel in Wadena from 4:00 until 7:00 p.m. with prayers at 5:00 and a Rosary at 6:00 pm. Visitation will resume at the church on Friday from 9:30 a.m. until the time of the Mass. Bernie, age 52, passed away on Monday, August 27, 2018, at the Fair Oaks Lodge, Wadena, MN, shortly after receiving a terminal diagnosis. Bernard “Bernie” Keppers was born to Willard Gregor and Darlene Mary (Imdieke) Keppers on February 4, 1966, in St. Cloud, MN. He was raised on the family farm and after graduating from Wadena High School Bernie attended college. Bernie joined the National Guard and proudly served for 12 years. He worked as an over-the-road truck driver, and later drove a milk truck. He loved fishing and relaxing on the lake. Bernie was an avid Vikings fan and enjoyed texting the play-by-play during games. He loved Fords and enjoyed working on them. Bernie could be a real jokester. Even if it wasn’t funny you had to laugh just because his laugh was contagious! He was like a big kid, showing-off his toys and he knew how to have fun. He entertained the kids by burying them in the sand at the park and playing games. Bernie was a very fun-loving person that will be missed by everyone who knew him. Preceding Bernard in death were his father Willard in 2004; and Oscar Gruba. Survivors include his children Matthew Keppers of Fargo, ND, Kayla (Payton) Roth of New York Mills, Jacob Keppers of Perham, Joshua Keppers of Wadena and Collin Keppers of St. Cloud; mother Darlene Keppers of Wadena; four grandchildren; siblings Duane (Kateri) of Wadena; sisters Brenda (Steve) Schiller, Bonnie (Frank) Walker and Denise McKigney; special friend Connie Goff; along with numerous friends. Pallbearers will be Don Goeden, Charles Swaisgood, Doug Blazek, Jacob Keppers, Joshua Keppers, and Aaron Schiller. Honorary pallbearers will be Anthony Glende, Koby Glende, Jayce Roth, Matthew Keppers, Bryan Keppers and Collin Keppers. Burial will be in Calvary Cemetery, Wadena, MN.

The Mass of Christian Burial for Bernard &#8220;Bernie&#8221; Keppers of Perham and formerly of Wadena will be celebrated at 11:00 a.m. on Friday, August 31, at St. Ann&#8217;s Catholic Church in Wadena, with Father Aaron Kuhn as celebrant.... View Obituary & Service Information

The family of Bernard Keppers created this Life Tributes page to make it easy to share your memories.

The Mass of Christian Burial for Bernard “Bernie” Keppers of...

Send flowers to the Keppers family.