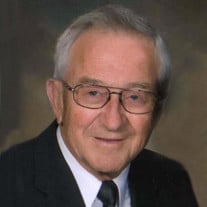 The public Mass of Christian Burial for Bernard “Bernie” Pavek of Wadena will be celebrated at 11:00 a.m. on Friday, January 29, at St. Ann’s Catholic Church in Wadena with Father Aaron Kuhn as celebrant. A public visitation will be held at the church on Friday from 9:00 a.m. until the time of Mass. The Knights of Columbus Rosary will begin at 9:30 a.m.   Bernie, age 88, passed away on January 18, 2021, at Sanford Health Care in Fargo, ND. Bernard "Bernie" Pavek was born to John and Mary (Adams) Pavek on August 21, 1932 on a farm near Waubun, MN. After graduating high school, he enlisted in the U.S. Navy serving his country from April 1952 to April 1956 when he received an honorable discharge. He then attended and graduated from Moorhead State University with a B.S. degree in education. He later pursued graduate studies at Mt. Mary College, Yankton S.D., University of Minnesota-Duluth and Bemidji State University. Bernie was the only member of his family of ten that received a college degree.  He taught at Wadena High School for 31 years with a focus on history, business education, D.E.C.A., and driver’s training. Numerous students and staff were inspired by his cheerful demeanor and dedication. For several years in retirement, Bernie also worked for Johnson Memorial Home as an assistant at funerals. Bernie and Therese Dusek were married on August 22, 1959, in Mahnomen. They moved to Wadena in the fall of 1960 where they raised their children. He enjoyed watching his children then his grandchildren grow to adulthood with solid educations. His love for his family was evident in his being active in their lives and never meeting or leaving them without a hug and a kiss. Traveling, camping, celebrating occasions were part of his life but being at the lake was his idea of what the best life had to offer.   Bernie was an active member of the Lions Club, Elks Lodge, and Knob Hill Sportsman’s Club all in Wadena, along with the American Legion. St. Ann’s Catholic Church, and the Knights of Columbus fed his faith over the years. Bernie was a county chairperson of the DFL Party and delegate to district and state conventions. He was awarded Teacher of the Year, Lion of the Year, the Lion’s Melvin Jones Fellow Award, along with the Helen Keller Award.   Preceding Bernie in death were his parents John and Mary; and siblings Leonard, Anthony, John, Lloyd, Patty Wander, Angie Blomseth, Beatrice Steinmetz, and twin sister Bernice Leier.   Memories of Bernie will be treasured by his wife of 61 years, Therese; children, Monica Pavek of Wadena, Tim Pavek of Bluffton and Margit (John) Schmelka of West Fargo; grandchildren, Caitlin (Mickey Goerdt), Cavan (Hannah), Cade (Kayli Oakman) Stackpool, Aaron (Kyli), Ally and Ashley Pavek, Anna and Adam Schmelka; great-grandchildren, Liam Stackpool and Rowyn Pavek; brother, Edward Pavek of Fertile; sister-in-law Barbara Pavek of Detroit Lakes; many nieces and nephews; along with a host of friends.   Honorary pallbearers will be Knights of Columbus and Lions Club members. Bernie’s grandchildren will serve as active pallbearers.   Burial will be in St. Michael’s Cemetery in Mahnomen, MN at 3:00 PM on Friday. Friends are invited to attend. In lieu of flowers, the family prefers memorials go to St. Ann's Catholic Church in Wadena, MN, and St. Frances Cabrini Church, Waubun, MN ** The funeral mass may be attended virtually provided either by St. Ann's Catholic Church or Schuller Family Funeral Homes & Cremation Services. Fr. Aaron's stream of the mass will be found on their facebook page at Mary Mother of the Church ACC (https://www.facebook.com/MarysACC) or via a link on their webpage (https://saintanns.net/). The funeral home will be streaming via the Zoom platform and you may contact us by phone (218-631-3632) or by email ([email protected]) to request an invitation.

The public Mass of Christian Burial for Bernard &#8220;Bernie&#8221; Pavek of Wadena will be celebrated at 11:00 a.m. on Friday, January 29, at St. Ann&#8217;s Catholic Church in Wadena with Father Aaron Kuhn as celebrant. A public visitation... View Obituary & Service Information

The family of Bernard Pavek created this Life Tributes page to make it easy to share your memories.

The public Mass of Christian Burial for Bernard “Bernie” Pavek...

Send flowers to the Pavek family.