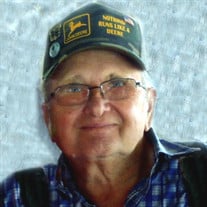 The funeral service for Bernard Voge of Bertha, will be held at 11:00 a.m. on Monday, February 5, at the New Life Church of God in Bertha with Pastor Mark Brown officiating. Visitation will be held at the church on Sunday from 2:00 until 4:00 p.m. and will resume on Monday from 9:30 a.m. until the time of the service. Bernard Elmer Voge was born June 11, 1933 to Elmer and Esther (Weiher) Voge in Mizpah, MN. The family moved back to Bertha when he was eight years old, and when he was old enough he helped farmers with field work. Bernard graduated in 1952 from Bertha High School and enlisted in the US Army on October 11, 1955. He served in Germany as a motor vehicle mechanic until his honorable discharge on September 30, 1957. Bernard was united in marriage with Dorothy Helen Zoll on June 24, 1961, at the Methodist Church in Menahga, MN. He had numerous jobs until becoming employed as a welder and electrician with Mammoth Industries in Plymouth for 35 years. They made commercial heating and air conditioners. He also did woodworking and was a member of the Teamsters. Bernard bravely faced cancer three times in his life; in 1989, 2005 and 2017, which brought him to the end of his journey on Tuesday, January 30, 2018 at the Lakewood Health System Care Center, Staples, MN. Bernard will forever be loved by his wife of 56 years, Dorothy of Bertha; son Vincent (Cindy) of Champlin; daughter Christine (James) Johnson of Delano; grandchildren Andrew (Rachel), Joshua (Kelly), and Elizabeth (Fernando) Bueno; brother James (Cindy) Voge of Mesa, AZ; sister Carol Voge of Fargo, ND; along with nephew Jerry Voge; niece Alice Johnson and nephews Calvin, Richard and Douglas Hertel. He was preceded in death by his parents Elmer and Esther; and a sister and her husband, Evelyn and Harold Hertel. Military honors will be provided by the William Larson Post 366, American Legion, Bertha, MN. Pallbearers will be Andy and Rachel Voge, Josh Voge, Kelly DuBois, and Lizzy and Fernando Bueno. A private interment will be held at a later date in the Sunset Cemetery, Minneapolis, MN.

The funeral service for Bernard Voge of Bertha, will be held at 11:00 a.m. on Monday, February 5, at the New Life Church of God in Bertha with Pastor Mark Brown officiating. Visitation will be held at the church on Sunday from 2:00 until 4:00... View Obituary & Service Information

The family of Bernard Voge created this Life Tributes page to make it easy to share your memories.

The funeral service for Bernard Voge of Bertha, will be held...