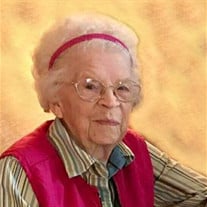 The funeral service for Bernice “Bunny” Piepkorn of Wadena was held at 11:00 AM on Wednesday July 26, 2017, at St. John Lutheran Church in Wadena with Pastor Stephen Meltzer presiding. Bunny passed away at the age of 90 years at the Perham Living Center in Perham on Friday, July 21, 2017. Bernice Eloise was born on October 4, 1926 at Eagle Bend, MN to Elmer and Florence (Peterson) Carlson. She graduated with the class of 1943 from Eagle Bend High School and attended the Minneapolis School of Beauty Culture, graduating on August 4, 1944. She was united in marriage with Marvin Gust Piepkorn on April 29, 1950 in the Parsonage at St. John Lutheran Church in Wadena. Bunny practiced cosmetology until she was 89 years old. Her first salon was in Perham until 1953 when she and Marv moved to Wadena and she opened Bunny’s Beauty Shop, first uptown and later in her home. The beauty shop became an important part of all family gatherings. Holidays were always spent at Bunny's as family was most important in her life. She also loved fishing with her husband, children, and grandchildren; And enjoyed quilting at home and with the ladies of St. John Lutheran. Bunny was preceded in death by her husband Marv on March 27, 1986; parents Elmer and Florence Carlson; grandson Arik David Piepkorn; and brothers Leonard Carlson, Kenneth Carlson, and Lawrence (Linda) Carlson. She is survived by her sons Kevin (Gloria) of Euless, TX, David of Wadena, John (Ann) of Minnetonka, and Paul of New York Mills; daughters Linda (LeRoy) Hoffman of Red Lake Falls and Susan (Jeffrey) Barrett of Forest Lake; 16 grandchildren and 22 great-grandchildren; and in-laws Verna Carlson, Elaine Carlson, Lorna Bjerke, Ron Piepkorn, and Lovell (Gerry) Piepkorn. Honorary pallbearers were Bunny’s grandchildren and great-grandchildren. Pallbearers were Scott Bjerke, Logan Piepkorn, Duncan McEwen, Joshua Barrett, Anders Piepkorn, and Josephine Piepkorn. Interment was in the Wadena Cemetery in Wadena.

The funeral service for Bernice &#8220;Bunny&#8221; Piepkorn of Wadena was held at 11:00 AM on Wednesday July 26, 2017, at St. John Lutheran Church in Wadena with Pastor Stephen Meltzer presiding. Bunny passed away at the age of 90 years at... View Obituary & Service Information

The family of Bernice "Bunny" Piepkorn created this Life Tributes page to make it easy to share your memories.

The funeral service for Bernice “Bunny” Piepkorn of Wadena was...

Send flowers to the Piepkorn family.