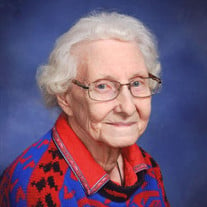 Funeral services for Bernita Delores Schmitz of Wadena will be held at 11:00 AM on Saturday, August 12, 2017, at St. John Lutheran Church in Wadena with Pastor Stephen Meltzer presiding. Friends may call at Schuller Family Funeral Home's Johnson-Schuller Chapel on Friday from 6:00 until 8:00 pm and at the church on Saturday from 9:30 AM until the time of services. Bernita passed away at the age of 93 years on Saturday, August 5, 2017, at the Comfort Care Cottages in Wadena, MN, under the gentle care of Heartland Hospice Care of Baxter. Bernita was born on October 29, 1923 to Ervin Henry and Amanda Helen (Umland) May at their home in Bartlett Township, Todd County, MN. She grew up on the family farm and attended country schools through 8th grade. She was confirmed at Immanuel Lutheran Church in Bartlett Township. Bernita was united in marriage with Gregor H. Schmitz on October 29, 1956 at St. Frederick’s Catholic Church in Verndale. Together they lived in Verndale until 1979 when they moved to their home in Wadena. She worked for a while as a waitress then was a homemaker and part time Wadena County Jail matron, assisting with meals and other duties to help the county and city law enforcement staff. After Greg’s death in 1994, she moved downtown into the Commercial Apartments. Health issues brought her to Little Bit O' Country assisted living in 2014 and on June 1, 2017, she moved to Comfort Care Cottages. Bernita was an active member of the VFW Women's Auxiliary and the Stitch and Chatter Quilters of St. John Lutheran Church. She enjoyed gardening, sewing, crocheting, as well as playing cards and doing word puzzles. Although Bernita never had any children of her own, she had a very special relationship with her niece, Julie Deiss. Julie, George and their sons Michael and Jeffery, were very blessed to have had Bernita in their lives. This blessing continued when Michael and Jeffery started families of their own. Her love and presence will be greatly missed. Bernita was preceded in death by her husband Greg on October 19, 1994; parents Ervin and Amanda May; brother Vernon May; and sister Verla Stark. She is survived by her brother Marvin May of Bertha, as well as many nieces, nephews, and great nieces & nephews. Honorary pallbearers are the members of the Stitch and Chatter Quilters of St. John Lutheran Church. Pallbearers are Bruce Uselman, Michael Deiss, Gregor Schmitz, Steven Babcock, Jeffery Deiss, and Bob Keppers. Interment will be in the Calvary Cemetery in Wadena.

The family of Bernita Schmitz created this Life Tributes page to make it easy to share your memories.

Funeral services for Bernita Delores Schmitz of Wadena will be...

Send flowers to the Schmitz family.