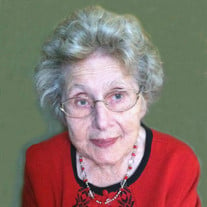 Bertha A. Vorderbruggen - Long version Funeral services for Bertha Anna Vorderbruggen age 90, will be held at 11:00 a.m. on Friday, May 18, at the Wadena Assembly of God Church, with Pastor Chuck Horsager presiding. Visitation will be held on Thursday from 5:00 until 7:00 p.m. at the Johnson-Schuller Chapel in Wadena. Visitation will resume at the church on Friday from 9:30 a.m. until the time of the service. Burial will be at St. John the Baptist Catholic Cemetery, Bluffton, MN. Bertha A. Vorderbruggen, formerly of Wadena, passed away on Monday, May 14, 2018, at Perham Living Center, Perham, MN. Bertha Anna (Geiser) Vorderbruggen was born May 28, 1927 to Gerhard "Jerry" Hubert & Mary Anna (Kaas) Geiser near Bluffton, MN. She attended St John's Catholic School in Bluffton. On May 16, 1950, she married Marvin M. Vorderbruggen. To this union thirteen children were born. They made their home west of Wadena. Several years later in 1974, Bertha moved to Moorhead with her eight youngest children. In 1976, Bertha returned to her hometown of Bluffton. After her children were raised she moved back to Wadena. Bertha bravely faced many challenges. She was a strong courageous woman and a wonderful mother, grandmother and great-grandmother. She went on to successfully complete nurses aid classes, and returned to school to get her GED. In 1987, she graduated from Wadena Tech School. She worked at various jobs, which included nursing homes, a cook at the Uptown Cafe, and also worked at the Wadena City Library. Her faith in Jesus Christ and her love for her family kept her strong. She was a hard worker, a great cook and loved to spend time with her family. She enjoyed making quilts, as she did for many of her grandchildren. Please continue to share her love for life as she did. She will truly be missed by all who knew her. She is survived by her thirteen children, Sherry (Dave) Elhert of Moorhead, Larry (Roberta) Vorderbruggen of New York Mills, Denise (Gary) Hagen of Princeton, Darrel (Vi) Vorderbruggen of Henning, Carrol Dockham of Wadena, Mary Lou Moen of Phoenix, AZ, Marlene Mohelski of Moorhead, David Vorderbruggen of Saint Joseph, MO, Kenneth (Debbie) Vorderbruggen of Henning, Elsie Schmidt of Wadena, Joyce West of Plymouth, Sheila (John) Richardson of West Fargo, ND, Janet (Jim) Kern of Deer Creek; 27 grandchildren, 23 great-grandchildren; sister, Agnes (Bill) Wallace of Perham; and brother-in-law, Russ (Judy) Hoffman of Moorhead; along with many nieces and nephews. She was preceded in death by her parents, Gerhard & Mary Geiser; step-father, Sylvester Schwartz; sister, Rita Hoffman; and brother, Wilbert & sister-in-law Marion Geiser. Memorials may be directed to Hospice of the Red River Valley.

Bertha A. Vorderbruggen - Long version Funeral services for Bertha Anna Vorderbruggen age 90, will be held at 11:00 a.m. on Friday, May 18, at the Wadena Assembly of God Church, with Pastor Chuck Horsager presiding. Visitation will be... View Obituary & Service Information

The family of Bertha Vorderbruggen created this Life Tributes page to make it easy to share your memories.

Send flowers to the Vorderbruggen family.