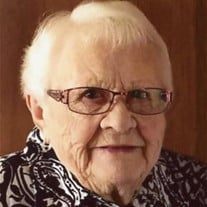 The Mass of Christian Burial for Betty Goche of rural Verndale will be held at 11:00 a.m. on Wednesday, January 17, at St. Hubert’s Catholic Church in Bluegrass.  Visitation will be held at the church on Wednesday from 9:30 a.m. beginning with a Christian Women’s Rosary. Visitation will continue until the time of the Mass.   Betty, age 92, passed away at her home in rural Verndale, MN, with family by her side, on January 12, 2018.   Betty Myra Goche was born to John Frank and Elizabeth Barbara (Kern) Cole on November 20, 1925 in Wadena, MN. During high school, she attended Staples Technical School to learn machining during the war. At one time, she worked at Rock Island Arsenal in Illinois. Betty and Romie grew up together, going through country school and eventually graduating from Verndale High School together. They went separate ways after high school, after the war both returned home and they reunited at a dance at the River Inn. When Romie asked to take her home, they both instantly knew that night they wanted to spend the rest of their lives together. They’ve been inseparable ever since!   Betty was united in marriage with Romeo “Romie” Nickolas Goche on September 23, 1946 in McMinnville, OR.  She enjoyed being outdoors and got a kick out of driving tractor when larger tasks needed to be done! She was known as the neighborhood guru, if anyone needed a haircut, sewing advice, or a splinter removal she was always there.  One of her proudest moments was when her and her son, Bruce fixed the hay baler when no one else could.   Betty was preceded in death by her parents John and Elizabeth; son Bruce and daughter Joan Goche.   She is survived by Romeo, her devoted husband of 72 years; brothers Barlaam Cole of Staples Care Center and Cloud (Bonnie) Cole of Kalispell, MT; sister Cele Olson of Ottertail, MN; 5 grandchildren and 4 great-grandchildren, with one on the way; along with a host of nieces, nephews, neighbors and friends.   Active pallbearers will be Bill Goche, Steve Goche, Jerry Kern, Joe Kern, Matt Kern, and Tom Giza.   Burial will be in the St. Frederick’s Catholic Cemetery, Verndale, MN. Memorials may be sent to Maryknoll Fathers and Brothers, Mercy Ships or Smile Train.

The Mass of Christian Burial for Betty Goche of rural Verndale will be held at 11:00 a.m. on Wednesday, January 17, at St. Hubert&#8217;s Catholic Church in Bluegrass.  Visitation will be held at the church on Wednesday from 9:30 a.m. beginning... View Obituary & Service Information

The family of Betty Goche created this Life Tributes page to make it easy to share your memories.

The Mass of Christian Burial for Betty Goche of rural Verndale...

Send flowers to the Goche family.