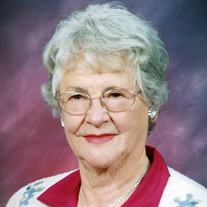 The memorial service for Betty Hartung will be at 2:00 PM on Tuesday, April 18, at the Immanuel Lutheran Church in Eagle Bend, with Pastor Justin Hesterman presiding. Visitation will be held from 5:00-7:00 PM on Monday, April 17, at Domian-Anderson Chapel in Bertha, and will continue at the church on Tuesday from 12:30 PM until the time of service. Betty passed away at the age of 90, at Central Todd County Care Center in Clarissa on Tuesday, April 11, 2017. Betty was born on April 1, 1927, in Bertha Township to Clinton and Florence (Riess) Hof. She graduated from Bertha High School with the class of 1945. After high school, Betty, went to the Cities to work munitions at the end of World War II for a few months. On December 4, 1945, she was united in marriage to Roger Hartung in the Hof household. Throughout her many years in Bertha, though she was always a homemaker, she worked for a time at Homecrest Industries making hassocks on the line, and she also worked as a bookkeeper at the family business, Bertha Feed and Produce. In later years, she was a home health aide and found great satisfaction as a caregiver. She found joy teaching Sunday School at St. Paul’s Lutheran Church as well as participating in their church choir, Ladies Aid, and Morning Dove Bible Class. Betty loved being on the farm, watching the cattle, the birds, and her garden. She loved cooking, especially for family occasions, along with tending to her flowers. Grandchildren, nieces, and nephews were her number one love. She was always positive and enthusiastic, and her friends will remember her motto “hot to trot”. She is preceded in death by her husband, Roger, in 1996; parents, Clinton and Florence; brothers, John and Stanley Hof; and sister, JoAnn Bliss. She will be remembered by sons, Steven (Sherry) Hartung of Anchorage, AK, and Byron (Eileen) Hartung of Bertha; grandchildren, Tracy Hartung, Jason Hartung, Holly Stocker, Matthew Hartung and John Hartung; great-grandchildren, Kenzy Hartung, Hunter Daniel, Trout Hartung, Meko Stocker, and Jordan Stocker; and brother, Dr. Clinton (Jan) Hof of DeSmet, SD. Inurnment will be in Zion Cemetery, Bertha, MN.

The memorial service for Betty Hartung will be at 2:00 PM on Tuesday, April 18, at the Immanuel Lutheran Church in Eagle Bend, with Pastor Justin Hesterman presiding. Visitation will be held from 5:00-7:00 PM on Monday, April 17, at Domian-Anderson... View Obituary & Service Information

The family of Betty Hartung created this Life Tributes page to make it easy to share your memories.

The memorial service for Betty Hartung will be at 2:00 PM on...

Send flowers to the Hartung family.