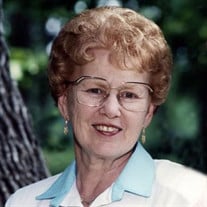 Visitation with the family of Beverly Jeanne Glover, a former Wadena and Perham resident, and currently of Melrose, MN, will be held at the Johnson-Schuller Chapel in Wadena on Monday, December 16 from 5:30 until 7:00 p.m. A formal service will not be held. Beverly, age 88, passed away on Friday, December 13, 2019, at Pine Haven/Villa Care Center, Melrose, MN. Beverly was born to Maurice and Laurene (Herman) Johnson on August 24, 1931 in Wadena, MN. After graduating high school she completed Business School to become an office manager and bookkeeper and was employed by Merickel Lumber Mills for 44 years. Beverly was united in marriage with DeWayne Glover at the First Congregational Church in Wadena, on May 1, 1952. They raised their family in Wadena. Over the years, she and DeWayne became avid agate pickers in MT and MN along the north shore of Lake Superior which led them into lapidary work and silver and goldsmithing. She enjoyed agate hunting, music, and time with friends in MN and TX where they wintered for about 15 years. Beverly truly enjoyed spending time with her children, grandchildren: Mandy, Jay, Jim, Anthony and Nathan as well as great-grandchildren: Harley and Reggie. By 2012, Beverly moved to Briarwood Assisted living in Perham and then in October 2013 it was time for her to move to the Pine Haven/Villa Care Center, in Melrose. Beverly was preceded in death by her husband DeWayne on September 22, 2013, her parents Maurice and Laurene; brother Robert Johnson. Surviving Beverly are her son Steve (Tammy) Glover of Perham; daughters Linda Budde and Paula Kroll both of Melrose; five grandchildren & two great-grandchildren; brother Larry (Dorthea) Johnson and sister-in-law Rose Johnson both of Wadena. Honorary pallbearers will be her family and all who called her friend. Burial will be held at a later date in Wadena Cemetery, Wadena, MN.

Visitation with the family of Beverly Jeanne Glover, a former Wadena and Perham resident, and currently of Melrose, MN, will be held at the Johnson-Schuller Chapel in Wadena on Monday, December 16 from 5:30 until 7:00 p.m. A formal service... View Obituary & Service Information

The family of Beverly Glover created this Life Tributes page to make it easy to share your memories.

Visitation with the family of Beverly Jeanne Glover, a former...

Send flowers to the Glover family.