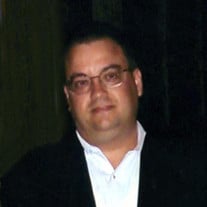 The memorial service celebrating the life of Brian Sandberg of Pillager, will be held at 2:00 p.m. on Friday, November 12, at the Domian-Anderson Chapel in Bertha, with Pastor Blake Rickbeil presiding. Visitation will be held at the chapel on Friday from 12:30 p.m. until the time of the service. With his loving wife Pam at his side, Brian, age 54, passed away on October 29, 2021, at the Mayo Hospital Methodist Campus, Rochester, MN, due to health issues related to diabetes. Brian was born to Richard and Nancy (Anderson) Sandberg on April 8, 1967, Hastings, MN. He began school in Longview, WA and at the age of 8, his family moved to Bertha, MN, where he graduated with the Class of 1985. During high school he played football and enjoyed being on the baseball team. Outdoors was a favorite place while deer hunting with his dad and family each year and fishing the local lakes. He and his dad had fun together making a lot of noise while cheering on their selected teams when watching sports. Brian served in the US Navy from June 20, 1985, through his honorable discharge on May 27, 1986. Brian married Pamela Mary (Asfeld) Etzler on August 16, 2003, in Pillager. They had a special connection and enjoyed traveling together with Duluth being a favorite get-away. Until his health issues and hospitalizations, Brian worked at Krushe House Residential Services. In his spare time, he enjoyed Gaming; his favorite being World of Warcraft. Other interests included fishing and the joy he found in being with his dog, Emmy, and cat, Angel. Brian was preceded in death by his father, Richard; in-laws, Delores and Donald Asfeld; brother-in-law Alan Asfeld; and sister-in-law, Julie Erickson. Surviving Brian are his wife of 18 years, Pam of Pillager; stepson, Michael (Ashley) Etzler of Pillager; grandchildren Blake, Lucas, and Makenna; mother, Nancy Sandberg of Bertha; siblings, Darren (Darcy) Sandberg of Longview, WA, Cory Sandberg of Fernly, NV, and Kelly Sandberg of Hewitt; brothers-in-law Duane (Jonell) Asfeld, Paul (Janet) Asfeld, Brian Asfeld and Scott Erickson; sister-in-law Karen Asfeld; and a host of extended relatives and friends. Military honors provided by MNAGHG. A private burial will be held at Zoar Cemetery, near Bertha, MN. In lieu of flowers, the family requests memorials to be used toward medical expenses.

The memorial service celebrating the life of Brian Sandberg of Pillager, will be held at 2:00 p.m. on Friday, November 12, at the Domian-Anderson Chapel in Bertha, with Pastor Blake Rickbeil presiding. Visitation will be held at the chapel... View Obituary & Service Information

The family of Brian Sandberg created this Life Tributes page to make it easy to share your memories.

The memorial service celebrating the life of Brian Sandberg of...

Send flowers to the Sandberg family.