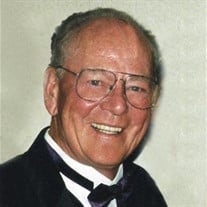 The Celebration of Life memorial service for Dr. Bruce Erdahl, of Wadena, will be held at 11:00 a.m. on Saturday, November 17, at the Wadena Elks Lodge #2386 in Wadena. Visitation with the family will be held at the Johnson-Schuller Chapel in Wadena on Friday from 4:00 until 6:00 p.m. and will resume at the Elks Lodge on Saturday from 10:00 a.m. until the time of the service. Bruce, age 82, passed away with family at his side on Thursday, November 8, 2018, at the Veterans Nursing Home in Fergus Falls, MN. Bruce Allen Erdahl was born to Sven Albert and Ruth Margaret (King) Erdahl on August 22, 1936 in Moorhead, MN. He attended North Dakota State University in Fargo, ND and continued his education at Temple University, Philadelphia, PA, to attain his medical diploma. The community will remember him as the radiologist at Tri-County Hospital in years past. Bruce entered the US Army on September 15, 1954 and served until his honorable discharge on September 6, 1957 at Ft. Sheridan, IL. Bruce was united in marriage with Judy Marie Fransen on November 28, 1988, at the Immanuel Lutheran Church in Wadena. He was an avid golfer, hunter and fisherman who enjoyed his time spent with the NLB guys (Noon Lunch Bunch), along with his fellow Lions Club members. Preceding Bruce in death were his parents Sven and Ruth; parents in-law Clifford and Harriet Fransen; sister Gloria Moeller; brothers-in-law Ronald Fransen, Herman Moeller and Lew Nauman. Bruce is survived by his devoted wife Judy; children Erik (Patti) Erdahl of Warren, Heidi (Alan Tomita) Erdahl of Seattle and Emilie (Shane Arnold) Erdahl of Moorhead; grandchildren, Austin and Dallas; sisters Joni (Bernie) Larson of Battle Creek, MI; sisters-in-law Carol (Wayne) Aspengren of Wadena, Linda (Lowell) Naley of Brainerd, Arlene Nauman of IL, Mary Fransen of NE; brother-in-law James (Barb) Fransen of Hewitt; numerous nephews, nieces, and friends; along with his four-legged buddy, Pushka. Honorary urn bearers will be Cam Larson, Terri Elliott, Jackie Jenson, Luke Fransen, Wanda Randgaard and Charity Drescher. Burial will be held at a later date in the Wadena Cemetery, Wadena, MN.

The Celebration of Life memorial service for Dr. Bruce Erdahl, of Wadena, will be held at 11:00 a.m. on Saturday, November 17, at the Wadena Elks Lodge #2386 in Wadena. Visitation with the family will be held at the Johnson-Schuller Chapel... View Obituary & Service Information

The family of Dr. Bruce Erdahl created this Life Tributes page to make it easy to share your memories.

The Celebration of Life memorial service for Dr. Bruce Erdahl,...

Send flowers to the Erdahl family.