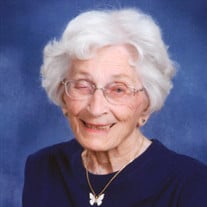 The memorial service for Carolyn Jennings of Wadena will be held 11:00 a.m. on Saturday, January 13, 2018, at the Immanuel Lutheran Church in Wadena, with Pastors Nate Loer and Megan Clapp presiding. Friends and former students may visit with Carolyn’s family at the church on Saturday from 9:30 a.m. until the time of the service. Carolyn, age 95, died Friday, December 22, 2017, at her home with family at her side and under the gentle care of Knute Nelson Hospice. Carolyn was born May 12, 1922 in Stillwater, MN to Morris and Carrie (Sorenson) Peterson. She grew up swimming. At the age of three years she was swimming in the St. Croix River near Bayport, MN. Carolyn was an Eagle Scout in high school. She was educated in the Stillwater Schools and received her Bachelor of Arts Degree from St Olaf College, Northfield, MN. Carolyn taught mathematics in various schools in Minnesota. She married Merlin Jennings July 17, 1949 at Bayport, MN. Later in life Carolyn was a member of the Twentieth Century Club and the Buzzin’ Dozen Homemakers Group. Carolyn delivered Meals On Wheels. She enjoyed Elder Hostels, bird watching, and working with stained glass. Carolyn was an active member of Immanuel Lutheran Church in Wadena, MN. In earlier years, she taught Release Time School, Vacation Bible School, and Sunday School. She had been active in the Miriam Circle and it's predecessors, along with holding various offices within the church. Carolyn is survived by her sons Mark and David (Yoshiko) Jennings of Duluth; and two grandchildren Sonja and Karsten; along with numerous neighbors, friends and grateful students. She was preceded in death by her husband Merlin on December 22, 2012; parents, Morris and Carrie Peterson; sisters Chrystal Allen and Lois Black; and brother Howard. Inurnment will be held at a later date in the Minnesota Veterans Cemetery, Little Falls, MN.

The memorial service for Carolyn Jennings of Wadena will be held 11:00 a.m. on Saturday, January 13, 2018, at the Immanuel Lutheran Church in Wadena, with Pastors Nate Loer and Megan Clapp presiding. Friends and former students may visit with... View Obituary & Service Information

The family of Carolyn Jennings created this Life Tributes page to make it easy to share your memories.

The memorial service for Carolyn Jennings of Wadena will be held...

Send flowers to the Jennings family.