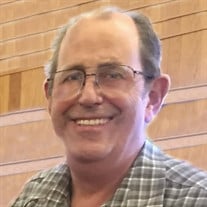 The funeral service for Charles “Chuck” Venzke of Wadena will be held at 11:00 a.m. on Monday, March 19, at the Immanuel Lutheran Church in Wadena, with Pastors Nate Loer and Megan Clapp presiding. Visitation will be held on Sunday from 5:00 until 7:00 p.m. at the Johnson-Schuller Chapel in Wadena and will resume at the church on Monday from 9:30 a.m. until the time of the service. Charles “Chuck” Keith Venzke was born June 13, 1946, to Kermit and Clara (Gesell) Venzke in Wadena, MN.  He was baptized in July of that year at Immanuel Lutheran Church, Parkers Prairie, MN.  Chuck spent his early years in Parkers Prairie and Miltona until the family moved to Golden Valley, MN, where he attended school in the Robbinsdale School District.  He was confirmed on April 10, 1960, at Golden Valley Lutheran Church.  Chuck spent 2 years working at Don Carlson turkey farms until graduating from Parkers Prairie High School in 1964.  Chuck said the most important thing he learned during that time was "How much I hated turkeys".  After graduation,  Chuck joined the United States Navy and served for 27 years as a nuclear engineer, traveling all over the world aboard nuclear submarines. Chuck married Barbara Kaye Rampling July 22, 1967 and they were married for 25 years.  They had 2 children, Michael Charles and Kristel Gloria. Chuck retired from the Navy as a W4 Warrant Officer in 1991 and moved to Wadena, MN.  In 2000 Chuck married Janice Meyer. Chuck had various jobs while back in Wadena. He enjoyed the friends he made while driving WDC school bus, working at Stern Rubber and other places.   Chuck was not only a life member of the VFW, American Legion and the "Cooties", but also served as VFW Post 3922 Post Commander and as VFW District 6th Commander. Chuck was very passionate about The VFW and all it stood for.   In 2003, Chuck was diagnosed with multiple myeloma which he courageously fought for fifteen years, over a decade longer than doctors predicted. Chuck received excellent care from local health providers and the VA Hospital in the Twin Cities during that time, and those providers often marveled at Chuck’s great outlook and resilience despite a tough disease and aggressive treatments. Chuck passed peacefully March 7, 2018, at the VA Hospital with his family and loved ones at his side. During his long battle with cancer, when someone asked, "How long have you had this cancer?" Chuck would answer, "I was diagnosed 5 new trucks ago."  He loved his trucks.    Chuck enjoyed  hunting, snowmobiling, traveling  but most of all fishing and playing games. His favorite was playing Acey Deucey with his dad Kermit. Chuck was preceded in death by his parents, Clara and Kermit Venzke, and his brother, Dennis Venzke, step granddaughter Sara Ludovissie all of Wadena, MN.  He is survived by his beloved wife, Janice Venzke; son, Michael Venzke of Fargo, ND; daughter, Kristel (Steven) Wittstruck of Eagan, MN;  step-daughter Kim (Dan) Ditsworth of Wadena, MN; step-son Loren (Kathy) Meyer of Wadena, MN; five grandchildren,  Cheramie, Gabriel, Shane, Blake, and Riley; five step-grandchildren Joshua, Robbie, Kelsey, Logan and Kaitlin; and four step-great grandchildren;  brother Kenneth (Sandy) Venzke of White Bear Lake, MN; sister, Renee Vossen of Cape Coral, FL; and sister-in-law Lorriane Venzke of Wadena, MN. Chuck will be dearly missed, but all rejoice knowing he’s home in Heaven, cancer-free, likely shopping for a new truck, and catching up on Acey Deucey with his dad. Honorary pallbearers will be Roland Larson, Ted Fischer, Henry Mack, David Anderson, George Kramer and Harley Umland. Active pallbearers will be Logan Meyer, Josh Ditsworth, Robbie Ludovissie, Kaitlin Ditsworth, Kelsey Ditsworth and John Chouinard. Burial will be in the Wadena Cemetery, Wadena, MN . Military honors will be provided by the Elmer Goche Post 3922, Veterans of Foreign Wars, Wadena, MN.

The funeral service for Charles &#8220;Chuck&#8221; Venzke of Wadena will be held at 11:00 a.m. on Monday, March 19, at the Immanuel Lutheran Church in Wadena, with Pastors Nate Loer and Megan Clapp presiding. Visitation will be held on Sunday... View Obituary & Service Information

The family of Charles "Chuck" Venzke created this Life Tributes page to make it easy to share your memories.

The funeral service for Charles “Chuck” Venzke of Wadena will...

Send flowers to the Venzke family.