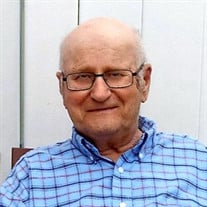 The funeral service for Charles Ernest “Ernie” Kallinen of Menahga, formerly of Wolf Lake, will be held at 11:00 a.m. on Sunday, October 7 at the Laestadian Lutheran Church in Menahga, with Jon Bloomquist presiding. Visitation will be held at the church on Saturday from 5:00 p.m. until 8:00 p.m. with a devotion at 7:00 p.m. Visitation will resume at the church on Sunday from 9:30 a.m. until the time of the service. Ernie, age 88, passed away in the early hours of September 30, 2018 in Menahga surrounded by his loving family. He was a member of the Menahga Laestadian Lutheran Church. His faith was the central focus of his life. Charles Ernest Kallinen was born to Charles Oscar and Saima Johanna (Pipping) Kallinen on January 15, 1930 in New York Mills, MN. He grew up on his parents’ farm in Wolf Lake Township. Ernie entered the US Army on April 16, 1952 during the Korean Conflict and was honorably discharged as a Corporal on March 30, 1954 at Fort Riley, KS. Ernie was united in marriage with Mildred Verna Darlene Hillukka on August 27, 1955 at the home of Mildred’s parents in Wolf Lake Township. His hands and heart provided for his family as a farmer, carpenter, and long-distance truck driver for many years. Ernie was happiest when he could help others, with no expectation of recognition. He was quiet and caring with unconditional love for family and friends. He loved spending time with his kids and grandkids, and even recently, would crawl on the floor to participate in their activities. Preceding Ernie in death were his parents Charles Kallinen, Saima Kallinen Korpi, step-father Eino Korpi, sister and brother-in-law Elsie and Eldon Slead, and grandson-in-law Brandon Scherping. Ernie is survived by his loving wife of 63 years Mildred of Menahga, children Linda (Edward) Retel of Elk River, Steven (Aila) of Buffalo, Diane (Elias) Aho of Big Lake, Brian (Joyce) of Menahga, Dean (Sharon) of Big Lake, Larry (Caroline) of Wolf Lake, Michael (Maija) of Wolf Lake, Eva Anderson (Joe) of Buffalo, and Brent (Melissa Roy) of Port Orchard, WA; 29 grandchildren, 10 great-grandchildren; siblings Ethel (Robert) Faller and Eino (Sylvia) Kallinen; former daughter-in-law Michelle Kallinen; and a host of friends and neighbors and brothers and sisters in faith. Casket bearers will be his six sons, Steven, Brian, Dean, Larry, Michael and Brent. Burial will be in the Menahga Cemetery, Menahga, MN.

The funeral service for Charles Ernest &#8220;Ernie&#8221; Kallinen of Menahga, formerly of Wolf Lake, will be held at 11:00 a.m. on Sunday, October 7 at the Laestadian Lutheran Church in Menahga, with Jon Bloomquist presiding. Visitation will... View Obituary & Service Information

The family of Charles "Ernie" Kallinen created this Life Tributes page to make it easy to share your memories.

The funeral service for Charles Ernest “Ernie” Kallinen of Menahga,...

Send flowers to the Kallinen family.