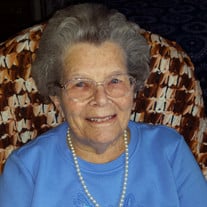 The funeral service for Clara Ward, a resident of the Central Todd County Care Center, and formerly of Bertha, will be held at 11:00 a.m. on Saturday, May 26, at the New Life Church of God in Bertha, with Pastor Jason Knoll presiding. Visitation will be held at the church on Saturday from 9:30 a.m. until the time of the service. Clara Ann (Elzig) (Buthman) Ward was born on September 26, 1923, in Hardin County, Iowa, to the late Anna (Trittien) Elzig and Charles Elzig. She was united in marriage to Ernest “Ernie” Buthman on February 25, 1942 in Eldora, Iowa. The couple made their home in Steamboat Rock, Iowa, where they farmed for many years. In 1952 they purchased a farm and moved to rural Bertha, MN. After a few years they decided to rent out their farm and moved to Illinois, Iowa, and then back to Bertha, MN, in 1965 permanently. Clara was employed at the Bertha hospital and worked there until she retired. She worked as a nurse’s aide in the medical supply area and medical records (which she enjoyed the most). She loved to travel and took many trips (including Alaska) visiting relatives all over the country. She loved gardening and was especially proud of her flower gardens. A few years after Clara and Ernie retired they sold their farm and moved to the town of Bertha. Clara was active in her church and the senior center in Bertha. Clara had been crowned Queen and was awarded the Todd County Outstanding Senior Citizen. She was also awarded the Spelling Bee champion in a competition in Bertha. After a brief illness with ALS, Ernie passed away in 1995. March 17, 2001, Clara married Chalmer Ward of Bertha. They loved getting together with family and friends. After Chalmer passed away in 2010, Clara moved to Clarissa, MN, at the Clarissa Todd County Care Center facility where she lived until her death on May 20th, 2018, at the age of 94. Clara was preceded in death by her parents, husband Ernie Buthman, son Eugene Buthman, husband Chalmer Ward, brother Richard Elzig, sister Helen Lemke, brothers-in-law Bob Lemke and Clarence Lindborg, sisters-in-law Lydia Buthman, Aileen Elzig, Zelda Elzig, and Elaine Elzig. Clara is survived by her son, Paul Buthman of Bisbee, AZ; daughter Cheryl (David) Anderson of Dayton, MN; grandchildren Mike (Shannon) Anderson of Rogers, MN, Sara (Jon) McElwain of Champlin, MN, great-grandchildren Brayden & Brody Anderson and Cooper & Luke McElwain; brothers Harold Elzig of Alameda, CA, Bob Elzig of Seldovia, AK; sisters Francis Lindborg of Sarasota, FL, and Ruth (Warner) Davidson of Phoenix, AZ; sister in law Eileen Elzig of Portland, OR, and many nieces and nephews. She is also survived by her step-children, step-grandchildren, step-great-grandchildren and their families. Honorary pallbearers are Clara’s grandchildren and their spouses and her great-grandchildren. Interment is at Peace Evangelical Cemetery, Bertha, MN.

The funeral service for Clara Ward, a resident of the Central Todd County Care Center, and formerly of Bertha, will be held at 11:00 a.m. on Saturday, May 26, at the New Life Church of God in Bertha, with Pastor Jason Knoll presiding. Visitation... View Obituary & Service Information

The family of Clara Ward created this Life Tributes page to make it easy to share your memories.

The funeral service for Clara Ward, a resident of the Central...

Send flowers to the Ward family.