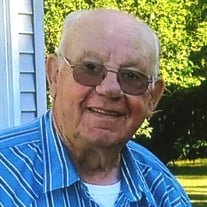 A funeral service celebrating the life of Clarence Harvey Korfe of Clarissa, will be held at 3:00 p.m. on Saturday, June 27, at the Family Life Church in Verndale with Pastor Bob Kaumans and Stephanie Ogle presiding. Visitation will be held Friday at the Schuller Family Funeral Homes’ Domian-Anderson Chapel in Bertha from 5:00 until 7:00 p.m. and will resume at the church on Saturday from 1:30 p.m. until the time of the service. Clarence, age 92, went to be with his Lord Jesus on June 23, 2020 at the Knute Nelson Care Center in Alexandria, MN. Clarence was born to Harm Daniel and Anna (Harms) Korfe on May 26, 1928, near Windom, in Cottonwood County, MN. He married the love of his life, Lois Ann Volsen on January 22, 1949, in Ellendale, MN. He enjoyed and looked forward to time spent with his family. They will remember his tradition of making caramel popcorn for them every Christmas. He farmed in Waseca County in southern Minnesota for 10 years, and 12 years near Bertha, before retiring in 1978. They enjoyed traveling to Canada, Mexico, Amsterdam and Holland, Jordan, Israel, and Greece, and shared 17 winters in Arizona after retirement. Sadly, Lois passed away in 2014. Clarence was blessed to find love again when he met Thelma Dick and they were married October 29, 2016. At their ages, they lived life to the fullest and had great adventures together, including a train trip to Washington DC and three winters in Texas. He was a member of the Assembly of God Church in Eagle Bend, serving as a Deacon and Sunday School teacher. He had an adventurous life driving his Amish friends all over the US, restoring old tractors, raising chickens and selling eggs. He will be remembered for always having a story to tell or a joke to pass along. Clarence will be missed by all who knew him. Preceding Clarence in death were his first wife Lois; parents Harm and Anna; infant grandson Dustin Korfe; brothers Wesley (Margaret), Raymond, John (Irene), and Alfred (Irene) Korfe; and sisters Margaret (Ben) Junker, Theresa (J. Harris) Riffle, Sylvia (Franklin) Selvey, Anne (Perry) Russell, Luella (Leonard) Pankratz, Jean (Alfred) Bolstad and Irene Cole. Blessed to have shared life with Clarence are his sons Dan (Donna), Jerry (Linda) both of Clarissa and Greg (Sue) of Long Prairie; 15 grandchildren, numerous great-grandchildren, and a very special great-great-granddaughter Kennedy Bare; along with Thelma and her children; and brother-in-law Eldon Cole of Des Moines, IA. Honorary pallbearers will be Clarence’s grandchildren and great-grandchildren. Serving as pallbearers will be Duane Korfe, Barry Larson, Nathan Korfe, Dan Crider, Jason Berg and Scott Larson. Burial will be in Green Lawn Cemetery, Verndale, MN.

A funeral service celebrating the life of Clarence Harvey Korfe of Clarissa, will be held at 3:00 p.m. on Saturday, June 27, at the Family Life Church in Verndale with Pastor Bob Kaumans and Stephanie Ogle presiding. Visitation will be held... View Obituary & Service Information

The family of Clarence Korfe created this Life Tributes page to make it easy to share your memories.

A funeral service celebrating the life of Clarence Harvey Korfe...

Send flowers to the Korfe family.