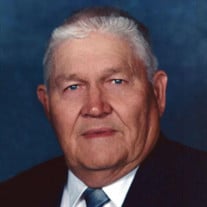 Private services for Dale Oftedahl, age 93, a resident at the Central Todd County Care Center in Clarissa will be held at a later date.   Dale, age 93, passed away on Saturday, April 18, 2020, at Central Todd County Care Center in Clarissa, under the care of Knute-Nelson Hospice.   Dale was born to Halvor and Lydia (Anderson) Oftedahl on March 29, 1927, in Wykeham Township, Todd County, Minnesota. Dale attended Carter Country School, completing eighth grade. Afterwards, he went to help his family on the farm, later spending a short time in the Twin Cities with his brother. On September 4, 1948 he was united in marriage with Darlene Young. The couple made their home near Eagle Bend, MN and had two daughters Connie and Beverly. Dale went to work for Gov. Nelson at the International Tractor Repair Shop in Eagle Bend, prior to going to work for the Todd County Highway Department, where he worked for 28 years before retiring in 1982. After retirement, Dale farmed and raised beef cattle and hogs on the family farm south of Eagle Bend. Dale loved spending time with his family and friends. His grandchildren and great-grandchildren were the delight of his day. Dale was the ultimate toy repairman. He enjoyed morning coffees at the Staples Bakery and taking nightly rides in the pickup with his wife Darlene to look for deer, check on crops, and visit with neighbors along the way. Dale loved playing cards and in his younger days he played horseshoes. In 2018 Dale and Darlene moved to Central Todd County Care Center where he enjoyed being the official “greeter”. He was preceded in death by his parents, and parents-in-law, siblings, Halvor “Jr.”, Kenneth, Duane, Diane and Pearl; brothers-in-law, Eugene and Robert and sister-in-law Betty. Surviving are his wife of 71 years, Darlene, daughters Connie (Mark) Nelson, and Beverly (Wayne) Morse along with sister Karen (Dennis) Beach and sister-in-law Evelyn Oftedahl. Dale is also survived by 11 grandchildren, 24 great-grandchildren, 1 great-great grandchild, along with one on the way. Dale also has multiple nieces, nephews, cousins and friends who will miss him dearly.   Honorary pallbearers will be Dale’s grandchildren and great-grandchildren.   Burial will be in Hope Cemetery, Eagle Bend, MN.

The family of Dale Oftedahl created this Life Tributes page to make it easy to share your memories.

Private services for Dale Oftedahl, age 93, a resident at the...

Send flowers to the Oftedahl family.