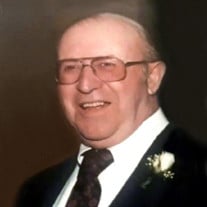 The memorial service for Dale Sommars will be held at 11:00 a.m. on Saturday, January 20, 2018 at the Immanuel Lutheran Church in Bartlett Township, with Pastor Robin Fish officiating. Visitation will be held at the church on Saturday from 9:30 a.m. until the time of the service. Dale, age 83, passed away surrounded by family on January 13, 2018, at Fair Oaks Lodge, Wadena, MN, with hospice care provided by Knute Nelson. Dale was born to Walter James and Oral Mary (Coon) Sommars on July 24, 1934, in Todd County, MN. After completing high school, Dale entered the US Army and served in the Korean Conflict until his honorable discharge. Dale married Beverly Ann Umland on August 11, 1956, at the Immanuel Lutheran Church, Bartlett Township. They made their home on the family farm where he operated a successful dairy herd. By 1999, they retired from farming and moved into Verndale. Dale enjoyed deer hunting with his family, and free time gave him the opportunity to delve into a book about tractors, the army, or a good Louis L’Amour western. An episode of M*A*S*H* could catch his attention, too! Dale was involved with the England Prairie Club (1965-85), and at the Redeemer Lutheran Church in Verndale until it closed. He currently was a member of the American Legion. Preceding Dale in death were his parents Walter and Oral; and brother-in-law Donald Umland. He is survived by his devoted wife Beverly; sons Gary Sommars of Laurel, MD, Gregory (Laura) Sommars of Osakis, and Jim (Melissa) Sommars of Newton, IA; daughters Barbara Sommars of Mountain House, CA and Deb (Kevin) Bell of New Port Richey, FL; nine grandchildren and two great-grandchildren; brothers Dan (LaVonne) Sommars of Wadena and Larry Dean (Pam) Sommars of Verndale; sisters Jean (Larry) Sharp of Duluth and Carol Winters of Staples; sisters-in-law Anita Umland of Minneapolis and Helen (Harry) Folkvord of Sun Lakes Valley, AZ; along with other relatives and friends. Honorary Pallbearers will be Dale’s grandchildren, Kyle Sommars, Nathan Ruud, Chad Sommars, Stephanie Sommars, Nolan Sommars, Samuel Sommars, Jason Sommars, Kacey Sommars and McKenzi Bell. Military honors will be provided by the Elmer Goche Post 3922, Veterans of Foreign Wars, Wadena, MN. Burial will be held at a later date in the Green Lawn Cemetery, Verndale, MN. Memorials may be directed to the American Parkinson Disease Association.

The memorial service for Dale Sommars will be held at 11:00 a.m. on Saturday, January 20, 2018 at the Immanuel Lutheran Church in Bartlett Township, with Pastor Robin Fish officiating. Visitation will be held at the church on Saturday from... View Obituary & Service Information

The family of Dale Sommars created this Life Tributes page to make it easy to share your memories.

Send flowers to the Sommars family.