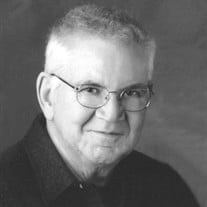 The funeral service for Norman “Dale” Sweere of Wadena, will be held at 11:00 a.m. on Tuesday, May 21, 2019 at the First Congregational United Church of Christ in Wadena, with Pastor Jim Stoneman presiding. Visitation will be on Monday, from 6:00 until 8:00 p.m. at the Johnson-Schuller Chapel in Wadena, and will resume at the church on Tuesday from 9:30 a.m. until the time of the service. Dale, age 83, passed away with family at his side on Thursday, May 16, 2019, at the Perham Living Center, Perham, MN. Dale was born to Harry and Julia (DeBruyn) Sweere on April 14, 1936, in Perham, MN. Dale graduated in 1954 from Wadena High School. After graduating he moved to Washington State and worked as a lumberjack. Then he returned to Minnesota and was united in marriage with Doris Nyberg on June 19th, 1957 and they made their home in Wadena. He worked for over 30 years selling wholesale building materials to building contractors. Dale enjoyed hunting, fishing, and collecting guns and fishing memorabilia. He also enjoyed spending summers out at Big Pine Lake at the family cabin. In his retirement years he spent winters in Arizona. His mornings were always spent having coffee with friends at the Boondocks Cafe and McDonald’s. Dale is preceded in death by his parents, Harry and Julia Sweere; and brothers, Gerald Sweere and Lawrence Sweere; and sister Marlene (Sweere) Peters. Dale leaves behind his devoted wife, Dorie of Wadena; children Bruce B. (Eva) Sweere of Long Lake, Deb (Dave) Nelson of Detroit Lakes, and Jackie (Brad) Kern of Wadena; 8 grandchildren, Kyle (Katie)Polman, Carson Kern, Tyler (Sierra) Berg, Karissa (Brett) Berg, Jed Arneson, Stacy Olson, Nick Arneson and Chris (Jennifer) Olson and 8 great-grandchildren; sister, Kathy (Gene) Hinman of Verndale and many nieces and nephews. Honorary pallbearers include his great-grandchildren Jayden Fassett, Kyan Olson, Griffen Olson, Caleb Olson, Ian Polman, Natalie Polman, Tanner Polman, and Ellison Berg. Active pallbearers will be his grandchildren. Burial will be in Wadena Cemetery, Wadena, MN.

The funeral service for Norman &#8220;Dale&#8221; Sweere of Wadena, will be held at 11:00 a.m. on Tuesday, May 21, 2019 at the First Congregational United Church of Christ in Wadena, with Pastor Jim Stoneman presiding. Visitation will be on... View Obituary & Service Information

The family of Dale Sweere created this Life Tributes page to make it easy to share your memories.

The funeral service for Norman “Dale” Sweere of Wadena, will...

Send flowers to the Sweere family.