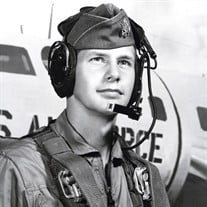 The funeral service for Dale Voge of Deer Creek will be held at 11:00 a.m. on Saturday, December 28, at the Wadena Alliance Church, with Pastors Vaughn White and Ken Uhren presiding. Visitation will be held on Friday at the Johnson-Schuller Chapel in Wadena from 5:00 until 7:00 p.m. with a time of gathering for sharing memories at 6:30 PM. The visitation will resume at the church on Saturday from 9:30 a.m. until the time of the service. Dale, age 81, passed away with family at his side on Monday, December 23, 2019, at Tri-County Health Care in Wadena, MN. Dale Wesley Voge was born at home to Wesley John and Luella Lillian (Wagner) Voge on October 23, 1938, in Deer Creek, MN. After completing high school, Dale studied Forestry at Bemidji State University for one year.   By April of 1959, he went on to serve in the US Air Force as a radar navigator until his honorable discharge as a Major . He felt honored and committed to serve his country for 20 years, including three tours in Vietnam. Dale was united in marriage with Veronica “Ronnie” Lucy Dodds on June 6, 1965 at the United Methodist Church in Deer Creek. Dale had a heart for farming and returned to farming after retiring from the Air Force. He was a member of the American Legion and a dedicated man of faith who loved being involved in his church.  He found joy being outdoors, fishing, duck hunting and traveling, and was an avid MN Vikings football fan. Most of all, Dale was devoted to his wife and family.  Dale was preceded in death by his parents Wesley and Luella; siblings Alan Voge and Linda Voge Saari; and niece Lori Voge Perkins. Surviving Dale are his devoted wife of 54 years Veronica; children Brian (Jennifer) Voge, Justin (Barb) Voge, Darin (Lysa) Voge, and Ian Voge; grandchildren Erin, Madison, Ryan, Emma, Claire, Cade, Leotie, Ellie and Hannah; and sister Carol Pearson; along with numerous family members and friends. Pallbearers will be Dale’s sons and grandsons. Burial will be in Oak Hill Cemetery, Deer Creek, MN. Military Honors provided by the 319th Air Force Honor Guard and Edward Carlson Post 283, American Legion, Deer Creek, MN. The family suggests memorials be directed to St. Jude’s Children’s Hospital, cancer research or Alzheimer’s research.

The funeral service for Dale Voge of Deer Creek will be held at 11:00 a.m. on Saturday, December 28, at the Wadena Alliance Church, with Pastors Vaughn White and Ken Uhren presiding. Visitation will be held on Friday at the Johnson-Schuller... View Obituary & Service Information

The family of Dale Voge created this Life Tributes page to make it easy to share your memories.

The funeral service for Dale Voge of Deer Creek will be held...