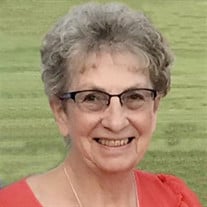 The memorial mass for Darlene Klemek of Eagle Bend will be held Wednesday, March 27 at 2:00 p.m. at St. Joseph’s Catholic Church in Bertha with Father Mitchell Bechtold officiating. A visitation will be held from 12:30 p.m. until the time of service. Darlene Carol Klemek, 83, died peacefully Thursday, March 21, 2019, at Knute Nelson Care Center in Alexandria, MN. Darlene (Greenwood) Klemek was born Feb. 16, 1936 in rural Otter Tail County near Wrightstown, MN, to parents Clifford and Gladys Greenwood. The fourth of five children, her parents soon bought and moved their family to a farm west of Bertha where Darlene spent the remaining years of her childhood, attended country school, and later graduated from Bertha High School in 1953. Following graduation, she worked as a telephone operator in Wadena, MN. She then moved to Minneapolis where she worked for Prudential Insurance Company as a bookkeeper. On Sept. 29, 1956 she married Lawrence Klemek at St. Joseph’s Catholic Church in Bertha. After they started their family in December of 1958, they moved to a new home in 1959 in Coon Rapids. In 1969, Darlene and Lawrence sold their suburban house and bought a farm northwest of Bertha where they moved their family to in early 1970. In 1979, Darlene and Lawrence sold their farm and bought the farm where Darlene grew up. Retiring from dairy farming in 1996, they sold the farm a year later and moved to their home in Eagle Bend. Nothing in life mattered more to Darlene than her family did. She loved spending time with her husband, her children, grandchildren, and great grandchildren. Darlene was often referred to as “spunky” and “talkative” by those who knew her well. In high school, Darlene and a friend were nicknamed Mutt and Jeff (characters from a comic strip). Darlene was Jeff, a name she was affectionately referred to her entire life, mostly by her brother Cliff. Always up for an adventure, she got a tattoo and para-sailed, all beyond the age of 70. Darlene also enjoyed her free time and she spent many hours reading books and going to the library to check out more books. Her normal routine each night before turning out her bedside lamp and falling asleep was to read a chapter or two of a good book. She would often say, “Reading is my sleeping pill.” Darlene was also a hard worker who enjoyed working at several part-time jobs she had held over the years. One of her favorite jobs was working at Wadena Floral. She loved plants and helping customers. But her most beloved job of all was working as the assistant cook for nearly 15 years for Lutheran Social Services (LSS). She helped prepare meals for LSS’ Meals on Wheels program at the Senior Center and most recently at the new Hilltop Regional Kitchen, both in Eagle Bend. Darlene also served a two-year term on the board for the Eagle Bend Senior Center. Darlene took great pride in helping those in need and she cherished the friendships she made along the way. She was especially grateful for the special relationships she had with all her co-workers at “Hilltop”. Darlene enjoyed playing bingo at various venues in the area, going to casinos with her husband to play slot machines, playing cards with friends (especially the game smear), taking walks and rides in the country, dining out, making family scrap books, collecting dolls, reading, and decorating her lovely Eagle Bend home. She also enjoyed watching television programs like Wheel of Fortune, 60 Minutes, and programs on the Hallmark Channel. Darlene also enjoyed watching and feeding wild birds. A fond memory of hers and a story she loved to tell, was the time on the farm as an adult when she discovered bluebirds using her then brand new bluebird houses. While on a walk one summer evening along the pasture fence where the birdhouses were located and nailed to fence posts, Darlene was thrilled at the sight of pretty bluebirds singing and flying about. She would often remark, “Until that day I hadn’t seen a bluebird since I had been a little girl.” Darlene loved watching her hummingbirds in Eagle Bend, too. She kept her two hummingbird feeders filled with sugar-water all summer long. A devout Catholic and long-time member of the same church that she and Lawrence were married in, Darlene enjoyed attending Mass each Sunday with her husband and going to the annual church bizarre fund raiser. A beautiful woman inside and out, Darlene will long be remembered as a woman with a zest for life, always kind and caring, loved laughing as no one else could, and was the world’s greatest listener, daughter, sister, cousin, aunt, wife, mother, grandmother, great grandmother, and friend as anyone could be so lucky to have, know, and love. Darlene was preceded in death by her parents Clifford and Gladys Greenwood, her sister Violet Hennagir, sister and brother-in-law Betty and Harold Blegen, and sister and brother-in-law Barb and Marvin Fischer. Left to cherish Darlene’s memories are her loving husband Lawrence, her children Blane Klemek (JoEllen), Barb (Don) Cooney, Stacie (Jim) Kimball; her grandchildren David (BreeAnna) Cooney, Emily Klemek, Nidhal Keddah, Cole Kimball, and Eva Kimball; her great grandchildren Lincoln Headbird and Hudson Cooney; her dear brother Clifford Greenwood, Jr., and many cousins, nieces and nephews, and other dear relatives on both the Greenwood and Klemek sides of her large extended family. Honorary pallbearers are Lanny Kolpek, Steve Greenwood, Brad Greenwood, Ryan Greenwood, and all of Darlene’s former co-workers at Hilltop Regional Kitchen in Eagle Bend. Active pallbearers are Darlene’s grandchildren, David Cooney, Emily Klemek, Nidhal Keddah, Cole Kimball, and Eva Kimball. Burial will be in the St. Joseph’s Catholic Cemetery, Bertha.

The memorial mass for Darlene Klemek of Eagle Bend will be held Wednesday, March 27 at 2:00 p.m. at St. Joseph&#8217;s Catholic Church in Bertha with Father Mitchell Bechtold officiating. A visitation will be held from 12:30 p.m. until the time... View Obituary & Service Information

The family of Darlene Klemek created this Life Tributes page to make it easy to share your memories.

The memorial mass for Darlene Klemek of Eagle Bend will be held...

Send flowers to the Klemek family.