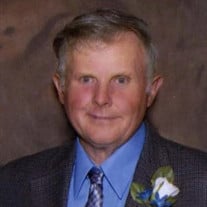 The Celebration of Life memorial service for David Kapphahn will be at 11:00 a.m. on Friday, November 30, 2018 at Schuller Family Funeral Homes’ Domian-Anderson Chapel in Bertha. Visitation with the family will be from 9:30 a.m. until the time of service.   David Alan Kapphahn was born on July 7, 1940, to Elmer L. and Etta J. (Barham) Kapphahn at their home outside of Bertha, MN. David was the youngest of eight children. He graduated in 1958 from the Bertha Public School.   After graduation, David entered the Air Force and served for four years, three of those years he was stationed in Germany. While there he enjoyed visiting historical sites and various other countries during his time off. He was honorably discharged in May of 1962.   On December 12, 1964, he married Lynne Petersen from Sebeka, at Zion Lutheran Church of North Germany Township. They had two children, Kelly and Kirby Kapphahn. David and Lynne lived with their children on the farm where David was born. He worked at Homecrest and UPS in Wadena for a few years and farmed, eventually farming fulltime. He had dairy and beef cows, horses for Kelly, several beloved dogs, and many cats.   David enjoyed going for drives in the evenings with his family when he was farming, checking out the crops and wildlife. He liked planning and building, and landscaping. David was a true patriot, always listening and learning about happenings in the world and with the government; then sharing what he learned. He was a lifelong learner and educator. After retirement, he appreciated having the time to help Kirby on his farm with fieldwork and taking care of the beef cattle. He also enjoyed helping Kirby with his electrician work when he could. In the evenings, David treasured time spent with Lynne watching Hallmark movies. He found joy in visiting and playing with his granddaughters, Mercedes and Mckayla. He loved his family very much.   David passed away, November 2, 2018, at his home with his family present.   David is preceded in death by his parents, Elmer and Etta Kapphahn; siblings, John Kapphahn, and Mary Robben; several sister and brothers-in-law; and one nephew. David is survived by his wife, Lynne; children, Kelly (Chad) Camacho, Kirby (Laurie) Kapphahn; granddaughters, Mercedes (Ricke) Setts, and Mckayla Kapphahn; siblings, Keith Kapphahn, Richard Kapphahn, Clare Kapphahn, DeEtta Watts, and Lenore Costello; along with many, many nieces and nephews, who will be his honorary pallbearers.

The Celebration of Life memorial service for David Kapphahn will be at 11:00 a.m. on Friday, November 30, 2018 at Schuller Family Funeral Homes&#8217; Domian-Anderson Chapel in Bertha. Visitation with the family will be from 9:30 a.m. until... View Obituary & Service Information

The family of David Kapphahn created this Life Tributes page to make it easy to share your memories.

The Celebration of Life memorial service for David Kapphahn will...