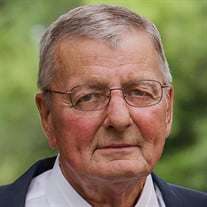 The Mass of Christian burial for David Stigman of Wadena will be celebrated at 11:00 a.m. on Friday, February 4, at St. Ann’s Catholic Church in Wadena, with Father Aaron Kuhn as celebrant. Visitation will be held at the Johnson-Schuller Chapel in Wadena on Thursday, from 4:00 until 8:00 p.m. at the Johnson-Schuller Chapel in Wadena with Prayers at 5:00 and Rosary at 6:00 p.m. Visitation will resume at the church on Friday from 9:30 a.m. until the time of the mass. David John Stigman was born on April 20, 1939, in Nimrod, MN, the youngest of four children of Jack and Anna (Entringer) Stigman. He attended country school with his brothers Allen and Richard along with his sister Jeanette. Dave graduated from Sebeka High School in 1957. He met the love of his life, Delores Damm in 1959 in Bluegrass, MN, and they began dating. He was drafted into the US Army in 1962 and was stationed at Fort Lewis, WA, where he received special orders to serve as the Military Police and spent the last year pitching for the Fort Lewis Post baseball team. Upon discharge from his military duty, Dave married Delores in 1964. They made Wadena their home, as he bought the Skelly Oil Bulk Fuel Service that they ran together until retirement in 2005. Dave and Delores welcomed their first child, Renee, in October 1965. A second child followed, Ryan, born in May of 1967. A third child came along, John, in June of 1970, and their fourth, Jill, in March of 1972. Dave was devoted to his family. He and Dee Dee took them on numerous vacations to Lake of the Woods, something his father did with him as a boy, creating countless cherished family memories. Dave loved to hunt and fish, spending many summer and winter days fishing lake trout in Canada, salmon on Lake Michigan, and walleyes in Minnesota. Dave most loved the game of baseball, something he learned from his father and played with his brothers nearly every day. He played town-team baseball for Nimrod, Menahga, Staples, and Wadena for over 20 years. He passed this love onto his sons and grandsons, spending some of his best moments playing catch with them in the driveway or watching them play baseball games. Dave loved all of his grandkids and great-grandkids and loved watching all of their events and activities and relished having them home for the holidays. Dave also served as a volunteer fireman in the Wadena Fire Department for 20 years. While Dave always wore a tough exterior, inside he was a man of love. He had a massive, generous heart for his family and friends. He was quick with a joke and playful banter and ribbing with everyone. Dave went to join his mother and father, Ann and Jack Stigman, and his sister Jeanette Roush in heaven on Sunday, January 30, 2022, at Sanford Hospital in Fargo, ND with his family at his side. He is survived by his loving wife of 57 years, Delores; children Renee Bertram (Howard Bazinet) of Shakopee, Ryan (Stacie) Stigman of Perham, John (Tracy) Stigman of Osakis, and Jill (Korey) Kruger of Willmar; 17 grandchildren and 18 great-grandchildren; brothers, Al (Bev) of Perham and Dick (Patti) of Burnsville; as well as many nieces and nephews. Active pallbearers will be his grandsons Jeremy, Adam, Aaron Bertram, Jack Stigman, Cole Christensen, Mitchell Kruger, and Drew Fearing. Honorary pallbearers are the remaining grandchildren. Military honors provided by Elmer Goche Post 3922, Veterans of Foreign Wars, Wadena, MN. Burial will be in the Nimrod Cemetery, Nimrod, MN.

The Mass of Christian burial for David Stigman of Wadena will be celebrated at 11:00 a.m. on Friday, February 4, at St. Ann&#8217;s Catholic Church in Wadena, with Father Aaron Kuhn as celebrant. Visitation will be held at the Johnson-Schuller... View Obituary & Service Information

The family of David Stigman created this Life Tributes page to make it easy to share your memories.

The Mass of Christian burial for David Stigman of Wadena will...

Send flowers to the Stigman family.