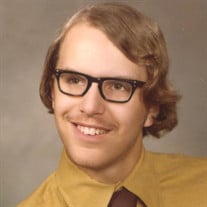 The Mass of Christian Burial for David Zeta of Wadena, will be celebrated at 11:00a.m. on Tuesday, July 6 at St. Ann’s Catholic Church in Wadena, with Father Aaron Kuhn as celebrant. Visitation will be held at the church on Tuesday, from 9:30 a.m. until the time of the Mass. David Gary Zeta was born to Ray and Lucille (Morris) Zeta on August 29, 1958, in Wadena, MN. He attended Kindergarten at Wadena Public School and then attended 1st-6th grades at St. Ann’s Catholic School, and attended public school to finish his high school education. Prior to graduation in 1976, Dave and his close friends enlisted in the US Navy’s Delayed Entry & Buddy Program in December 1975 for training. After serving four years in the Navy, Dave resided in East Grand Forks, MN, for general construction training at the A.V.T.I. Dave met Virginia Terveer at the River Inn in Aldrich, MN and they were married on September 27, 1986 at St. Ann’s Catholic Church in Wadena. Dave worked for Flour City Architectural Metals and Alpana Aluminum Products in Medina and Minneapolis for a few years. Dave and Virginia moved back to Wadena in 1989, where Dave was employed with RDO Frozen Foods in Park Rapids, until, due to serious illness, he retired in 2019. Dave passed away of mesothelioma cancer on June 24, 2021, at Fair Oaks Lodge in Wadena. Dave had several varied interests in life, including reading the Pioneer Journal and Star Tribune, fishing, watching football and the MN Twins, along with taking trips to the North Shore. Locally, he enjoyed being with close friends and family while at Stony and Leaf lakes. Dave also treasured time with his young nieces and nephews. Preceding Dave in death were his parents, Ray and Lucille; uncle and aunt, George and Virginia Krause; sister-in-law, Kathy Zeta; mother-in-law, Fran Terveer; brother-in-law, Larry Terveer; and other relatives and friends. He is survived by his wife, Virginia Zeta of Wadena; siblings Jack (Heidi) Zeta, Diane (Roger) Vien, Duane (Ellen) Zeta, and Jean (Walter) Paler; brothers-in-law and sisters-in-law, Jeri Terveer, Jeanne (Jerry) Schmidt, Monica (Randy) Kallhoff, Caroline (Jim) Montgomery, and Al (Sara) Terveer; father-in-law, Al Terveer; several nieces and nephews; along with other family and friends. Pallbearers will be Jack Zeta, Duane Zeta, Al Terveer Jr, Tom Vanhorn, Greg Lorentz and Jesse Montgomery. Burial will be in Calvary Cemetery, Wadena, MN.

The Mass of Christian Burial for David Zeta of Wadena, will be celebrated at 11:00a.m. on Tuesday, July 6 at St. Ann&#8217;s Catholic Church in Wadena, with Father Aaron Kuhn as celebrant. Visitation will be held at the church on Tuesday,... View Obituary & Service Information

The family of David Zeta created this Life Tributes page to make it easy to share your memories.

The Mass of Christian Burial for David Zeta of Wadena, will be...

Send flowers to the Zeta family.