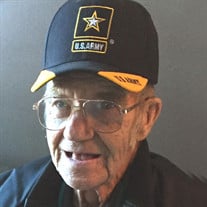 The memorial service for Delbert Horn, of Hewitt, will be held at 2:00 p.m.  on Friday, April 13, at the New Life Church of God in Bertha with Pastor Ken Uhren presiding.  Visitation will be held at the church on Friday from noon until the time of the service.   Delbert, age 85, passed away unexpectedly, on April 8, 2018, at his home near Hewitt, MN.   Delbert was born to William and Agnes (Davidson) Horn on May 13, 1932, in Bartlett Township, MN. He grew up on the family farm with his siblings Hank, Helen, Donna and Ruthann.   He attended country school until going to Wadena High School, where he graduated in 1950. He entered the US Army in 1953. He served in the Korean War, and was stationed in France for a period of time. He was honorably discharged in December 1954.   Delbert was united in marriage with Patty Nadene Taylor on June 27, 1959 in Staples, MN. They lived in Verndale, he worked at the lumber yard. Later the family moved to a farm outside of Hewitt. Delbert eventually purchased his father’s farm, where he lived the rest of his days.   He enjoyed camping, horseback riding, working his farm, attending his children’s and grandchildren’s events and fishing. Delbert and Patty raised a number of other children amongst their own over the years. Many nieces and nephews looked at Delbert as a father figure and loved him as much as any child could.   Delbert is preceded in death by his wife Patty on December 18, 2011; children Del Rae Marie Horn and Kevin William Horn; parents William and Agnes; brother, Henry; and sister, Donna Friese.   Surviving Delbert are his sons Scott and Richard (Lisa), both of Hewitt; daughter Angela (Eddie) Ybarra of Fargo, ND; grandchildren, Michael (Elizabeth) Horn, Darcy (Ted) Mindermann, Jennifer (Kevin) Voeltz, Carl Lindner,  Sarah Lindner, Kasey (Josie) Horn, Robby Horn, and Nikki Horn; great-grandchildren, Alexis, Hailey, Sophia, James, and Emma; sisters Helen (Roger) Leaderbrand and Ruthann Clasen; along with numerous nieces, nephews, neighbors, and friends.   Honorary urn bearers will be Glen Wood, Tim Cole, Duane Solga, Wayne Leaderbrand, and Allen Friese.   Military honors provided by Elmer Goche Post 3922, Veteran of Foreign Wars, Wadena, MN.   Burial will be held at a later date in the Oak Valley Cemetery, rural Hewitt, MN.   Arrangements by the Schuller Family Funeral Homes & Cremation Services, Bertha, MN.

The memorial service for Delbert Horn, of Hewitt, will be held at 2:00 p.m.  on Friday, April 13, at the New Life Church of God in Bertha with Pastor Ken Uhren presiding.  Visitation will be held at the church on Friday from noon until the time... View Obituary & Service Information

The family of Delbert Horn created this Life Tributes page to make it easy to share your memories.

The memorial service for Delbert Horn, of Hewitt, will be held...

Send flowers to the Horn family.