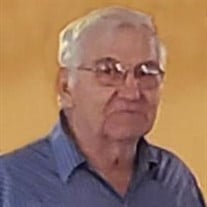 Funeral services for Dennis Fore of Hewitt will take place at 3:00 p.m. on Friday, July 5, 2019 at Schuller Family Funeral Home's Domian-Anderson Chapel in Bertha with Pastor Ken Uhren presiding. Friends may call at the funeral home on Friday from 1:00 p.m. until the time of services. Dennis, 75, died on Saturday, June 22, 2019. with his family by his side at the Fair Oaks Lodge in Wadena. Dennis was born at home to Melvin and Lula Mae (Henderson) Fore on March 26, 1944 in Henriette, MN. He attended country school through the sixth grade and completed his education at Pine City High School. On May 29, 1969, Dennis was united in marriage with Lucinda Jane Klinkhammer in Pine City. Over the years Dennis work hard as a farmer, logger and later as a truck driver. He had a passion for working with horses and was a member of the Draft Horse Association. Dennis was preceded in death by his parents Melvin and Lula, and a brother, Curtis Fore. Left to hold Dennis’ memory in their hearts are his wife, Lucinda, of Hewitt; children Aaron (Mary Uberto) Fore, Jennie (Kyle) Flanery and Trent (Ashley) Fore all of Hewitt; 12 grandchildren and 4 great-grandchildren; along with siblings Caroline (Ralph) Hall of Atwater and Bertha Sem of Golden Valley, ND. Honorary pallbearers will be Floyd Snelling, Fred Heller, Bernard Dahlvang and Mike Hynes. Serving as pallbearers will be Dennis’ grandchildren. Burial will take place on Saturday, July 6 at 1:00 p.m. in Henriette Cemetery, Pokegama Township, Pine County, MN. Memorials may be directed to the American Brain Tumor Association. (ww.abta.org)

The family of Dennis Fore created this Life Tributes page to make it easy to share your memories.

Funeral services for Dennis Fore of Hewitt will take place at...

Send flowers to the Fore family.