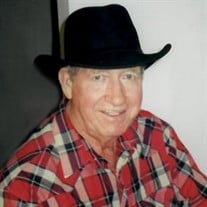 The funeral service for Dennis “Ike” Hahn, a resident of The Meadows assisted living in Wadena, and formerly of Perham and Verndale, will be held at 2:00 p.m. on Saturday, November 16, at the St. Paul’s Lutheran Church in Perham, with Reverend Andrew Ratcliffe presiding. Visitation will be held at the church on Saturday, from 12:30 p.m. until the time of the service. Dennis, age 84, passed away with family at his side on Tuesday, November 12 , 2019, at The Meadows assisted living in Wadena, MN, with compassionate care provided by Knute Nelson Hospice. Dennis “Ike” was born to Rudolph and Velma (Marquardt) Hahn on August 31, 1935, in Echo, MN. On March 14, 1960, Dennis married Carol Forcier in Brookings, SD. They moved to Minneapolis where their daughter Linda was born. The family moved to Wadena, Sandy’s birthplace, and then to Little Falls where Brenda and Theresa were born. Bradley and Jeffrey were born in Brainerd when the family lived near Camp Ripley. Carol and Dennis farmed for 21 years before parting ways. By then Dennis drove truck and worked at Tuffy’s Dog Food until his retirement. In younger years Dennis enjoyed riding horse, fishing and hunting.  He was an avid twins baseball fan and attended games with his children.  He had a great sense of humor often sharing a few good jokes (or bad ones)!  Singing and dancing also brought him happiness.  His greatest joy was spending as much time as he could with his family that he deeply loved. Dennis was preceded in death by his son Bradley; granddaughter Maria; parents Rudolph and Velma; siblings Faye, Gloraine, Marge, Delores, Jan, Jean, Argyle and Mary; and the mother of his children Carol. Surviving Dennis are his children Linda (Harvey) McGrane of Hewitt, Sandra (Roger) Allen of Braham, Brenda Romig of Brainerd and Theresa (Marc) Cregan of Oak Grove; and Jeff Hahn of Wadena; 26 grandchildren and 57 great-grandchildren; several nieces and nephews; along with siblings Marlowe, Clayton and Gayle. Honorary pallbearers will be Dennis’ grandchildren and great-grandchildren. Pallbearers will be Roger Hahn, Shain Hahn, Darwin McGrane, Josh McGrane, Mike McGrane and Tony Glenz. Burial will be in St. Paul’s Lutheran Cemetery, Perham, MN.

The funeral service for Dennis &#8220;Ike&#8221; Hahn, a resident of The Meadows assisted living in Wadena, and formerly of Perham and Verndale, will be held at 2:00 p.m. on Saturday, November 16, at the St. Paul&#8217;s Lutheran Church in... View Obituary & Service Information

The family of Dennis "Ike" Hahn created this Life Tributes page to make it easy to share your memories.

The funeral service for Dennis “Ike” Hahn, a resident of The...

Send flowers to the Hahn family.