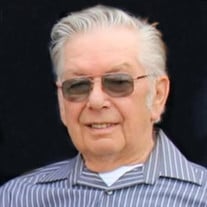 A private memorial service will be held to celebrate the life of Dennis Kimber (age 82) of Hewitt, who passed away on April 13, 2022 at Lakewood Health System Hospital.  Dennis Virgil Kimber was born to Irvin and Wilma (Dunker) Kimber on May 12, 1939, at the family home near Henning, MN. Shortly after, the family moved west of Hewitt where he then attended Bertha Public School. After school he painted houses and worked for area farmers.  Dennis’ passion for farming and raising animals began at a young age. He started off raising a countless amount of rabbits while helping his dad on the farm. After Dennis and Judy married (April 7th, 1961), they started a farm and family of their own.  Dennis’ happy place was in the barn alongside his wife Judy, the dairy cows, chickens and numerous cats. This love was quickly passed down not only to his own children but to his grandchildren and great-grandchildren as well. As his children and grandchildren grew, he also enjoyed their various school events. Somehow, Dennis and Judy made square-baling in 90 degree heat one of their grandchildren’s fondest memories. It was in these moments that Dennis taught his children and grandchildren not only the importance of family but also of hard work.  Most of the time you could find Dennis, on the tractor (or fixing a tractor!), in the barn, or sitting around the kitchen table, visiting and munching on whatever sweet treat Judy made that day. Dennis was a man of few words most of the time, except if you got him on any topic remotely related to farming.  Christmas Eve nights when everyone gathered under the same roof was one of his favorite days of the year. Even though he probably knew he was getting chocolate covered peanuts (every year), he still smiled and made everyone feel like it was the best present ever.  Although Dennis is already greatly missed, we can take rest in knowing that there is a little bit of him in each and every one of his family members.  Preceding Dennis in death were his parents, Irvin and Wilma; grandson, Travis Dittberner; and brother, Roland Kimber. Forever remembering Dennis will be his beloved wife of 61 years, Judy; children, Steve (Nancy Matz) of Wadena, Brenda (Rod) Kempe, of Hewitt, Rhonda (John) Dittberner of Parkers Prairie, Kevin Kimber, and Brad Kimber both of Hewitt; 10 grandchildren and 20 great-grandchildren; siblings, Wendell Kimber of Bertha, Lois Stelflug of Wadena nd Avis Lenz of Jordan.  Honorary urn bearers will be his grandchildren Jennifer Otto, Jason Kempe, Justin Dittberner, Ryan Kempe, Ross Dittberner, Kristine Pearson, Kayla Wenker, Travis Dittberner †, Allysa Kimber and Derik Kimber. Burial will be held at a later date in Woodside Cemetery, rural Hewitt, Mn.

A private memorial service will be held to celebrate the life of Dennis Kimber (age 82) of Hewitt, who passed away on April 13, 2022 at Lakewood Health System Hospital.  Dennis Virgil Kimber was born to Irvin and Wilma (Dunker) Kimber on May... View Obituary & Service Information

The family of Dennis Kimber created this Life Tributes page to make it easy to share your memories.

A private memorial service will be held to celebrate the life...

Send flowers to the Kimber family.