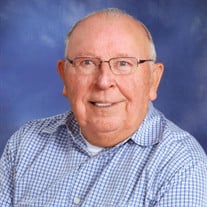 The funeral service for Dennis Peterson of Wadena, will be held at 11:00 a.m. on Tuesday, June 15, at the Immanuel Lutheran Church in Wadena, with Pastors Nate Loer and Megan Clapp presiding. A gathering of family and friends will be held at the Johnson-Schuller Chapel in Wadena, on Monday from 5:00 p.m. until 7:00 p.m. and will resume at the church on Tuesday from 9:30 a.m. until the time of the service. Denny, age 91, passed away after a lengthy illness on June 9, 2021, at his home in Wadena, MN. Dennis was born to Edwin and Minnie (Dehnel) Peterson on April 25, 1930, in Wykeham Township, Eagle Bend, MN. He attended Sunday School and was confirmed at Petri Lutheran Church. He was a student at District #28 Country School in Germania Township, and graduated high school in 1948 at Eagle Bend. Denny was drafted and honorably served in the US Army from May of 1953 to 1955, having been stationed at Ft. Eustis, VA and at Toul, France, as a heavy equipment operator. His occupations varied from working at Weibye’s Store in Eagle Bend, then five years at the Gambles hardware store in Wadena, before working at the Wadena Post Office as a letter carrier for 29 years. He also started painting houses part-time in 1985, which became full-time work when he retired from the Postal Service in 1989. He also worked 10 years as a funeral assistant for Al Bielema. In earlier years, Dennis enjoyed bowling, fishing, hunting, and playing cards, especially pinochle. More recently, he opened his home to many young men who were attending the local technical college. They became close personal friends, maintaining contact for years after graduation. In Wadena, Dennis was a member of the Elks Lodge (50 yrs), American Legion (62 yrs), with 30 years as Adjutant, and served on the Wadena Cemetery Board (30 yrs) having been President for a time. In 2013, he was honored as the Senior Citizen Volunteer. Denny devoted 55 years to Boy Scouts of America as a scout master and assistant scout master, serving on the Eagle Board of Review, earning the Silver Beaver Award in 1989, and received the Lifetime Achievement Award in 2017. Preceding Dennis in death were his parents, Edwin and Minnie; siblings Wallace (Ina) Peterson, Eldora (Herb) Johnson, Alice (Lloyd) Lenz, Louis (Diane) Peterson, Ardys (Lauren) Harris, Shirley (Merle) Beheng, Norma Peterson; and brother-in-law Gerald Ohman. Surviving Dennis are his children, Randy (Christa) Peterson of Wadena and Vicky (James) Rholl of Hendersonville, NC; six grandchildren, seven great-grandchildren; siblings Vera Ohman of Wadena, and Carol (Mark) Peterson of Eveleth; along with many nieces and nephews. Pallbearers will be John Howard Johnson, Adam Graves, Joshua Graves, Jared Miller, Jon Rholl and Matthew Rholl. Military honors provided by the Elmer Goche Post 3922, Veterans of Foreign Wars, Wadena, MN. Interment will be in Wadena Cemetery, Wadena, MN. Memorials may be directed to the Immanuel Lutheran Church in Wadena.

The funeral service for Dennis Peterson of Wadena, will be held at 11:00 a.m. on Tuesday, June 15, at the Immanuel Lutheran Church in Wadena, with Pastors Nate Loer and Megan Clapp presiding. A gathering of family and friends will be held... View Obituary & Service Information

The family of Dennis Peterson created this Life Tributes page to make it easy to share your memories.

The funeral service for Dennis Peterson of Wadena, will be held...

Send flowers to the Peterson family.