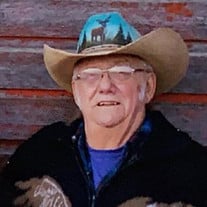 The Celebration of Life Open House for Dennis Emil Reierson, formerly of Eagle Bend, will be held on Thursday, March 7, 2019 at Schuller Family Funeral Homes' Domian-Anderson Chapel in Bertha from 1:00 until 4:00 p.m. with a time of gathering for prayers and sharing memories at 3:00 p.m. led by Pastor Bonita Orr.   Dennis died at the age of 83 years on Friday, March 1, 2019, at the Alomere Health Hospital in Alexandria. MN.   Dennis Emil Reierson was born to Emil and Luella (Rasmussen) Reierson on August 13, 1935, at their home in Eagle Bend, MN. He attended country school through the eighth grade and graduated from Eagle Bend High School.   The saying, “Variety is the spice of life.” fits Dennis’ way of living. He found employment in various ways, including at a creamery, through farming, and as a mechanic. He also drove grain trucks, cattle trucks, and was a lowboy driver for Central Specialties. He was an avid outdoorsman, and many of his life-activities revolved around hunting, ice car racing, fishing, and exploring the US. Dennis played pool and softball, was a history buff and was also intrigued in learning about other cultures. He enjoyed his family and friends, and could be quite the chatterbox in his jovial way, pouring out the stories he was glad to share!   Dennis was preceded in death by his parents, Emil and Luella; his sisters and their husbands, Lila (Bob) Murch, Marge (Leo) Hess and Marlys (Don) Christensen; and brother-in-law Everette “Sonny” Johnson.   Memories of Dennis will be filled with pride for his wife Joan of Alexandria; children, Barbara (Bill) Gimbel and Lyndon (Lori Anderson) Reierson; six grandchildren and 4 great-grandchildren; his sister Myrna Johnson of Eagle Bend; along with a host of nieces, nephews, neighbors and friends.   Burial will be held at a later date in Hope Cemetery, Eagle Bend, MN.

The Celebration of Life Open House for Dennis Emil Reierson, formerly of Eagle Bend, will be held on Thursday, March 7, 2019 at Schuller Family Funeral Homes' Domian-Anderson Chapel in Bertha from 1:00 until 4:00 p.m. with a time of gathering... View Obituary & Service Information

The family of Dennis Reierson created this Life Tributes page to make it easy to share your memories.

The Celebration of Life Open House for Dennis Emil Reierson,...

Send flowers to the Reierson family.