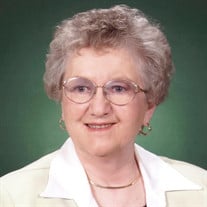 The public funeral service for Diana Olson of Wadena, will be held at 10:30 a.m. on Monday, June 7, at the Immanuel Lutheran Church in Wadena, with Pastor Nate Loer presiding. Visitation with family and friends will held at the Johnson-Schuller Chapel in Wadena, on Sunday from 4:00 p.m. until 8:00 p.m. with a Prayer service beginning at 7:00. Visitation will resume at the church on Monday from 9:00 a.m. until the time of the service. Diana, age 83, passed away May 27, 2021, with family by her side at her home in Wadena, MN, under the tender care of Knute Nelson Hospice. Diana was born on February 2, 1938, Groundhog's day, in Fertile, MN to Anton and Lena (Duckstad) Eid. She was baptized and confirmed at Sundahl Lutheran Church. She attended Golden Willow Country School in rural Gary, MN, graduating valedictorian from Gary High School in 1956. She went on to attend Minnesota State University Moorhead on a full academic scholarship to become a teacher. She started and finished her 36-year career teaching 3rd grade for the Wadena School District. Diana was nominated to represent Wadena for the Teacher of the Year in 1990. She was a long-time member and officer of Delta Kappa Gamma. Mrs. Olson was the favorite teacher to many! Diana married James Olson on June 17, 1962, at Sundahl Lutheran Church. They began their life together in Wadena and built three beautiful homes on the southwest side of town. They raised two daughters and dedicated their time to family, church, and the community. James and Diana were married over 44 years. James passed away in 2006 after a courageous 15-month battle with cancer. Diana was his full-time caregiver and loved him dearly. Shortly after James’ passing Diana lost most of her vision to macular degeneration. This loss of vision did not stop her from seeing the joy in everything she did, such as gardening, crocheting baby afghans and prayer shawls, hosting events, cooking, and listening to more than 2000 audio books provided by the National Library Service for the Blind and Physically Handicapped. She was so grateful for this service. Diana truly enjoyed cooking, and baking cookies and bread to share with others. She especially liked making traditional Norwegian foods as she was so proud of being 100% Norwegian! She was the hostess for countless gatherings in her home and on her patio. Before her vision loss she was a master seamstress and quilter, and many are blessed with her handy work. One of her passions was spending time with her family, especially her five grandchildren. She often held "Grandma Camp" where the children learned skills like reading, baking, and gardening. Diana had yearly reunions with the Whitt House teacher group and with her three best friends from college Lorna, Orpha and Darlene. Their friendships have endured for over 60 years. Diana was a faithful member of Immanuel Lutheran Church in Wadena and took part in many of the activities throughout the years such as the director of the Luther Kid Singers, a member of the Senior Choir, Sunday school director and teacher, member of the Women's Circle, and coordinator of church weddings. Diana is survived by her daughters Denise (Joe) Huebsch of St. Cloud, and Michelle (Todd) Christiansen of Sartell; grandchildren Ann Huebsch (Clint Wendt) of St. Cloud, Elizabeth Huebsch (Brian Schreiner) of West Fargo, John Huebsch of St. Cloud, Ashley Christiansen of Sartell and Nicole Christiansen of Sartell; siblings Donald Eid of Gary and Luella Digerness of Moorhead; sisters-in-law Janet Scott of Park Rapids and Karen Harp of Champlin; and her 11 nieces and nephews. Diana was preceded in death by her parents; husband James; sister Sylvia Gohdes; and two brothers who passed during infancy and childhood. Honorary pallbearers will be Keith Gohdes, Stephen Gohdes, Harsey Scott III, Paul Scott, Wade Digerness, and Donald Eid. Serving as pallbearers will be Joe Huebsch, Todd Christiansen, Ann Huebsch, Clint Wendt, Elizabeth Huebsch, Brian Schriener, John Huebsch, Ashley Christiansen and Nicole Christiansen. Burial will be in Wadena Cemetery, Wadena, MN. A special thanks to many of Diana's wonderful family, friends and neighbors who have been so supportive, helpful and caring over the past year and for the care provided by Knute Nelson Hospice. Memorials may be directed to: Immanuel Lutheran Church, (https://www.wadenaimmanuel.org/giving) National Library Service (https://www.loc.gov/philanthropy/online-donation/fund/) and Knute Nelson Hospice (https://www.knutenelson.org/about-us/foundation/donate-now)

The public funeral service for Diana Olson of Wadena, will be held at 10:30 a.m. on Monday, June 7, at the Immanuel Lutheran Church in Wadena, with Pastor Nate Loer presiding. Visitation with family and friends will held at the Johnson-Schuller... View Obituary & Service Information

The family of Diana Olson created this Life Tributes page to make it easy to share your memories.

The public funeral service for Diana Olson of Wadena, will be...

Send flowers to the Olson family.