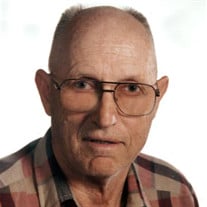 The  funeral service for Dirk Trosen, of Wadena, will be held at 11:00 a.m. on Monday, September 3, 2018, at the Wadena Alliance Church in Wadena, with Pastor Charles Lamason and Pastor Vaughn White presiding.  Visitation will be held on Sunday at the Johnson-Schuller Chapel in Wadena, from 6:00 until 8:00 p.m.  Visitation will resume at the church on Monday from 9:30 a.m. until the time of the service.   Dirk, age 90, passed away on Tuesday, August 28, 2018, at Fair Oaks Lodge, Wadena, MN.   Dirk Henry Trosen was born to Herman and Grace (Hulst) Trosen on May 15, 1928, in Larimore, ND.  Dirk was united in marriage to Phyllis Jean Davis on June 16, 1951.  He was a member of the US Army, and honorably served his country from 1951-53 in France during the Korean Conflict.   Dirk worked at various jobs, including Homecrest in Wadena, a plastic factory in Minneapolis, roofing and siding in Oregon, maintenance at Jennings Lodge Campground in Oregon, and farmed from 1953-1959 and again from 1978-1988. Community members will remember him as the owner of the Hewitt Elevator.   Dirk enjoyed watching things grow in the garden, playing games with his family, and being an armchair umpire for the MN Twins baseball team!   Preceding Dirk in death were his parents; daughter Katherine; son John; daughter-in-law Masako; grandchildren Isaiah and Sophia and Matthew; brothers Robert, Herman, and Ferd (twin); and sisters Doris Lanz, Grace Freitag, and Bernice Geiser.   Left to hold memories of Dirk in their hearts are his wife of 67 years, Phyllis of Wadena; children Duane (Stacy Langer) of Wadena, Roger (Beverly) of Bertha, Susan (Steve) Loerzel of Perham, Marilee of Alexandria, Dale (Kathy) of Valley City, ND, Richard (Becky) of Wadena, and Charles of Hackensack; grandchildren Brian, Troy, Becky, Kevin, Lisa, Joey, Chrissy, Jacob, Joshua and Jordan; great-grandchildren Elliott, Adam, Paige, Tatum, Tobias, Nicholas, Emma, Savannah, Nash, Andre and Nellie; sisters Evelyn Schweiger, Janet Lamason and Janice Carlson all of Wadena; along with brothers John Trosen of Wadena and David Trosen of Verndale.   Casket bearers will be his grandsons, Brian Trosen, Troy Trosen, Kevin Trosen, Joseph Morin, Jacob Trosen, Joshua Trosen, and Jordan Trosen. Burial will be in the Wadena Cemetery,  Wadena, MN.

The  funeral service for Dirk Trosen, of Wadena, will be held at 11:00 a.m. on Monday, September 3, 2018, at the Wadena Alliance Church in Wadena, with Pastor Charles Lamason and Pastor Vaughn White presiding.  Visitation will be held on Sunday... View Obituary & Service Information

The family of Dirk Trosen created this Life Tributes page to make it easy to share your memories.

Send flowers to the Trosen family.