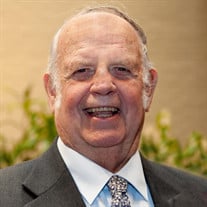 A private funeral service for Donald Simmons Sr, of Wadena, will be held at a later date with Pastors Kevin Gregory and Amy VanValkenburg presiding. Family and friends may gather for a visitation on Tuesday, June 30, from 5:00 until 8:00  p.m. at the Johnson-Schuller Chapel in Wadena.   Days before his 89th birthday, Don passed away on Wednesday, June 24, 2020, at the St. Cloud Hospital.   Don was born to Charles Lavern and Pearl Frances (Babel) Simmons on July 1, 1931, in Vanport, PA.   Don served with the US Air Force as a mechanic from 1949 during the Korean Conflict until his honorable discharge as a Tech Sgt in 1969. During that time, Don was united in marriage with Josephine “Jo” Ann Nick  on April 24, 1950 in Cumberland, MD.  After the Air Force moved them around the world (Japan, England and 7 states), they made their home in Wadena where they raised their family.  He was a mechanic for the City of Wadena for 24 yrs, who could be found restoring bicycles and metal recycling in “the Shed”.  Josephine passed away May 13, 1997. Don found love again and married Martha May (Nugent) Munroe on February 27, 1999, at Beaver, PA.   He was a proud member of the United Methodist Church, USAF Sgts' Assoc., American Legion (past commander), Boy Scouts of America (Silver Beaver Award recipient), Wadena Planning Commission, Wadena Cemetery Board, and was an Honorary Admiral in Whiskey Creek Navy.      Preceding Don in death were his first wife Josephine; parents Charles and Pearl; siblings Charles Simmons Jr, and Bertha Simmons Schooley; and daughter-in-law Karen Schauer Simmons.   Don is survived by his wife Martha of Wadena; children Don Simmons, Jr of Alexandria, Dave (Janel) Simmons of Andover, Diana (Doug) Anderson of Maple Grove, and Dan (Teri) Simmons of Stewartville; 8 grandchildren and 11 great-grandchildren; step-children Debbie Cliff) Sellers of Georgetown PA, John (Donna) Munroe of New Brighton PA, Kevin (Nikki) Munroe of Beaver PA, and Keith (Amy) Munroe of Industry PA; and step-grandchildren and great-grandchildren.   Serving as pallbearers will be Don’s grandchildren Robert  Simmons, Brian  Simmons, Anne Simmons Moore, Eric  Simmons, Greg  Simmons, Matthew  Anderson, Aaron  Simmons and Andrew  Simmons.   Burial will be in Wadena Cemetery, Wadena, MN.   Military honors provided by the MNAGHG and Elmer Goche Post 3922, Veterans of Foreign Wars, Wadena, MN.

A private funeral service for Donald Simmons Sr, of Wadena, will be held at a later date with Pastors Kevin Gregory and Amy VanValkenburg presiding. Family and friends may gather for a visitation on Tuesday, June 30, from 5:00 until 8:00  p.m.... View Obituary & Service Information

The family of Donald Simmons Sr. created this Life Tributes page to make it easy to share your memories.

A private funeral service for Donald Simmons Sr, of Wadena, will...

Send flowers to the Simmons family.