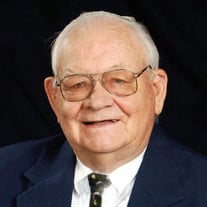 The funeral service for Donald Stemson will be held at 11:00 AM on Thursday, July 20, 2017 at Immanuel Lutheran Church with Pastor Nate Loer presiding. Visitation will be held on Wednesday from 5:00 - 7:30 PM at the Johnson-Schuller Chapel in Wadena. Visitation will continue at the church from 9:30 AM until the time of service. With family by his side, Don, age 87, passed away on Saturday, July 15, 2017 at Tri-County Healthcare Hospital in Wadena, MN. Donald Ivan Stemson was born to Henry Bennett and Ida Bertina (Aldahl) Stemson on October 3, 1929, in Austin, MN. He entered the US Army on January 18, 1952 and served during the Korean Conflict until his honorable discharge as a Corporal on January 19, 1955, at Ft. Sheridan, IL. He was a member of the VFW Post 3922, in Wadena. Don was united in marriage with Charlotte Ruth Aagard on Valentine’s Day in 1969 in Wadena, MN. In addition to his adventures as an over-the-road truck driver, he enjoyed fishing, hunting, camping and playing cards. He had an avid interest in anything to do with old-time cowboys! He was especially fond of spending time with family and friends who will all miss his quiet clever wit and tender-hearted spirit. Don was preceded in death by his parents Henry and Ida; son William Stemson; brothers Harlan, Conwell and Stanley Stemson; and sister-in-law Ruth Stemson. Left to miss him are his wife of 48 years, Charlotte of Wadena; daughters Gloria (Joseph) Mason of Morrison, CO, Barbara (Terry) Farland of New Hope, and Mary Dubois of Champlin; sons Roger (Lori) Dubois of Emerado, ND, Michael (Mary) Dubois of Elk River and Gregory Dubois of Watertown, SD; as well as many grandchildren, great-grandchildren and great-great-grandchildren; brother-in-law LeRoy (LaVon) Aagard of Wadena and sisters-in-law Menetta Stordahl of Northfield and Ardis Aagard of Backus; nephew Robert (Janet) Stemson of Woodland, WA along with a host of other family and friends. Pallbearers will be Robert Stemson, Joseph Mason, Terry Farland, Roger Dubois, Michael Dubois and Gregory Dubois. Burial will be in Leaf River Cemetery, near Wadena, MN.

The funeral service for Donald Stemson will be held at 11:00 AM on Thursday, July 20, 2017 at Immanuel Lutheran Church with Pastor Nate Loer presiding. Visitation will be held on Wednesday from 5:00 - 7:30 PM at the Johnson-Schuller Chapel... View Obituary & Service Information

The family of Donald Stemson created this Life Tributes page to make it easy to share your memories.

The funeral service for Donald Stemson will be held at 11:00...

Send flowers to the Stemson family.