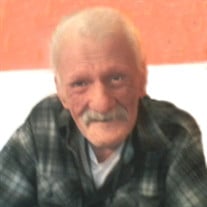 The Mass of Christian Burial for Donald Weller of Wadena, and formerly of Bluffton, will be celebrated at 11:00 a.m. on Monday, April 15, at the St. John the Baptist Catholic Church in Bluffton, with Father Aaron Kuhn as celebrant. Visitation will be held on Sunday at the Johnson-Schuller Chapel in Wadena from 4:00 until 7:00 p.m. with a rosary at 5:00 and prayers at 6:00 p.m. Visitation will resume at the church on Monday, from 9:30 a.m. until the time of the Mass. Donald, age 95, passed away on Sunday, April 7, 2019, at the Comfort Care Cottage, Wadena, Minnesota. Don was born to John and Scholastica (Wegscheid) Weller on May 22, 1923 in St. Cloud, Minnesota and later moved to the family farm north of Wadena. There he helped with the farm chores and field work until he was drafted into the Army in 1944. He received an honorable discharge in 1945 due to health issues. He then moved to Montana and pursued his career by becoming an excellent carpenter. While living in Montana, he was an active member of St. Jude’s Catholic Church, a Knights of Columbus member, and also active in the local carpentry union. He was very generous with his time and talent  helping several of his siblings in Montana and Minnesota with their building projects, including building construction and remodeling jobs. After Don’s retirement, he moved back to Bluffton and later to the Comfort Care Cottage in Wadena. He grew very close to the staff and residents over the 20 years that he resided there. In the last two years of his life, he also gained the friendship of a dog, Trixie, who was always lying beside him or at his feet. His kindness and generosity to family and friends was felt by all who knew him and he will be missed. Don was preceded in death by his parents, John and Scholastica; siblings Bernice (Bretz), Isabelle (Langer), Kenneth, Arnold and Duane, as well as four brothers-in-law. Surviving Don are his sisters, Arlene (Geo) Kato, Great Falls, Mt, Johanna (Mark) Kato, Havre, Mt, and Judy (Collin) McLeod, Glenwood, MN; brother Joe (Joanie), Ottertail, MN; and sisters-in-law, Dorothy, Maple Grove, MN, Eileen, Merced, CA, and Marge, New York Mills, MN. Active pallbearers will be John Weller, Scott McLeod, David Bretz, Steve Andrie, Wayne Weller and Greg Graham. Honorary pallbearers will be the Comfort Care Cottage staff. Burial will be in St. John the Baptist Catholic Cemetery, Bluffton, MN.

The Mass of Christian Burial for Donald Weller of Wadena, and formerly of Bluffton, will be celebrated at 11:00 a.m. on Monday, April 15, at the St. John the Baptist Catholic Church in Bluffton, with Father Aaron Kuhn as celebrant. Visitation... View Obituary & Service Information

The family of Donald Weller created this Life Tributes page to make it easy to share your memories.

The Mass of Christian Burial for Donald Weller of Wadena, and...

Send flowers to the Weller family.